The German Mechanic is a minor antagonist in the 1981 iconic action-adventure film Raiders of the Lost Ark, the first installment of the Indiana Jones film series.

He was an enormous bull of a man with a shaven head, who was one of two mechanics servicing the Nazis' Flying Wing at Tanis in 1936. He only spoke German. Highly skilled in boxing and brutally strong, he was able to best Indiana Jones in hand-to-hand combat in spite of being killed by the plane's propeller blade during their confrontation.

He was portrayed by the late Pat Roach, who also played Thoth Amon in Conan the Barbarian, Count Lippe in Never Say Never Again, the Chief Guard in Indiana Jones and the Temple of Doom and General Kael in Willow.

When the Flying Wing was being prepped to fly the Ark of the Covenant out of Tanis to Berlin in 1936, the mechanic emerged from his hut to see Indiana Jones brawling with the other mechanic.

Apparently being pugnacious enough, the huge Bavarian stepped in after the first mechanic had been taken down by Jones, and challenged the hero to a fistfight.

The mechanic absorbs a right hook. Although he easily outmatched Jones, he unintentionally saved the archaeologist's life at one point. When the Flying Wing's pilot was about to shoot Jones, the mechanic unknowingly stepped in between Jones and the pilot, blocking his line of fire before he was knocked unconscious by Marion Ravenwood.

Finding the challenge all too easy and the archeologist never trounced, the mechanic ordered Indiana to fight back, oblivious that the rotating plane was drawing the propellers ever closer. Bemused by Jones ducking for safety, the concerned mechanic turned around to look behind him and was confronted by the propellers, chopping him to bloody bits. In this way he was much like a Chief Guard Jones had encountered a couple years ago in that he was killed by his own side's machinery.

Despite his minor role in the plot, bits can be gathered about the German Mechanic. For one, while drafted in the wehrmacht military as a mechanic, his true passion was for boxing, which he enjoyed more then anything. He saw Indiana Jones arrival as a chance to test his skills, as such he refrained from shooting Jones and challenged him to a one on one duel of hand to hand combat.

Despite his brutality, the mechanic insisted on a fair fight; he could've easily finished Jones when he was knocked to the ground, but chose to pull up the archeologist to continue their duel. Ironically it was the mechanic's insistence on playing with Jones that proved to be his demise, as he had simply shot with the nearby pistol Jones, the archealogist would've been dead and the movie would've been over. 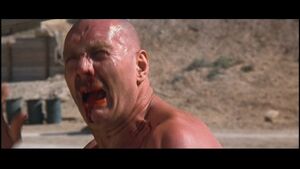