Magical powers including Dispel and Silence

Trap and eliminate the Forest Owls resistance movement and the SeeDs (failed).

Gerogero is a twisted, skeletal, biomechanical monster and a boss in Final Fantasy VIII. This grotesque abomination is the true form of the body double of President Vinzer Deling.

It was used as a decoy to trap the Timberian resistance movement known as the Forest Owls. It later mocked the heroic SeeDs, who were aiding the Forest Owls against Vinzer Deling's tyranny, for their failure to kidnap the true Galbadian dictator and engaged them in battle aboard a train departing from the city-state of Timber for the country of Galbadia, after they have dealt enough damage on the moving train. In the end, the heroes won and killed the creature.

As an undead enemy, Gerogero takes on the properties innate to all undead units, namely taking half damage from physical attacks, being weak to Fire and Holy, being immune to Death and Doom and dying instantly from resurrecting abilities and items.

Gerogero uses plenty of status ailment attacks, and inflicts the party with statuses like Silence and Berserk. "Brrawghh!" is a special attack that causes damage to a target and also inflict it with Slow, Curse, and Blind.

It has the valuable Double spell to draw.

Gerogero is undead, and therefore Cure and Life spells hurt it, but throwing a Phoenix Down at it will kill him instantly. 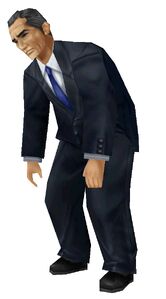 Gerogero, disguised as the false President Vinzer Deling
Add a photo to this gallery

Retrieved from "https://villains.fandom.com/wiki/Gerogero?oldid=3525261"
Community content is available under CC-BY-SA unless otherwise noted.