Gertrude is an anti-villainess from Umineko no Naku Koro ni who is a senior aide in the Eiserne Jungfrau, and a first-class priest.

Gertrude appears as a girl with red eyes and long blond hair. She wears a uniform that is similar to Cornelia's.

Gertrude serves as a senior aide in the Eiserne Jungfrau. She appears to be extremely deadpan when on duty, but is actually very charitable and well-liked by her juniors.

Gertrude is able to create powerful barriers, as shown when she makes them to protect Erika Furudo during her wedding. Her barrier was only broken when all of The Seven Sisters of Purgatory attacked the barrier, distracting her. 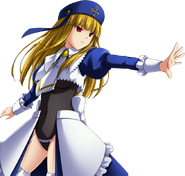