Villains Wiki
Register
Don't have an account?
Sign In
Advertisement
in: Male, My Hero Academia Villains, Manga Villains,
and 21 more

Lieutenant of the Paranormal Liberation Battlefront

Create a world where the strongest are at the top hierarchy of the world.

Geten, also known as Iceman, is a major antagonist in the manga/anime series, My Hero Academia. He was a member of the Meta Liberation Army, who took part in the Deika City battle between the MLA and the League of Villains.

Following the defeat of Re-Destro, the Meta Liberation and League of Villains were reorganized into the Paranormal Liberation Front and he became one of the nine lieutenants under Tomura Shigaraki's command.

He is voiced by Seiichirou Yamashita in Japanese version and Khoi Dao in English, the latter also voicing Cancer Cell from Cells at Work!.

Geten is often seen wearing winter clothing, dressed in a long hooded parka and boots. In battle, he kept his hood on to mask his face.

Underneath his hood, Geten appears to have long white hair with long eyelashes and light-colored eyes. As well he has shown to have sharp teeth.

Geten is a loyal follower to the cause of the Meta Liberation Army, believing that those with powerful Quirks should not be kept restrained but instead should be at the top of the world above the weak. He devotes his loyalty to Re-Destro, being extremely grateful for the latter having taken him in and granting him more strength.

He is proud of his Meta Ability and has spent his whole life on perfecting it. Due to this, he never attended school and instead chose to stay devoted to his own ideals, believing that only power measures a person's worth.

As a villain, Geten has no qualm in killing or engaging heroes in combat, and becomes angered when they interfere with his leader's plans, going as far as to refer to them as the "dogs of the state" and saying that they won't die painless deaths for their interference.

His views of pride and self-worth also clearly extend to Geten himself, as he cried in disappointment with himself when having tied with Cementoss.

Before joining the Meta Liberation Army, Geten spent most of his time training on his abilities. He never attended school and was instead more focused on getting stronger. He was eventually taken in by Re-Destro, who saw potential in him. During his time in the Meta Liberation Army, he was able to strengthen his Quirk to the point where he could control the temperature of his ice.

Geten took part in the battle between the Meta Liberation Army and the League of Villains. He was given the task to take on Dabi, who ended up confronting him in the battlefield. The two exchanged words to each other before engaging in battle.

Despite the two being confident in being able to defeat the other, they proved to be evenly matched, as their Quirks were able to counter one another. Twice then sends his cloned army in the battlefield, which attempt to take on Geten, but Geten was able to dispatch the army with a wave of ice, made from the water below them.

With the army taken care of, Geten continues his battle with Dabi but is then interrupted by Gigantomachia. He attempts to restrain the giant behemoth, but Gigantomachia was able to easily overpower him and knocked him out of the battle.

Following the events that took place, Geten recovered perfectly fine from the battle. Once the Paranormal Liberation Front was formed, he became of the nine lieutenants under Tomura's command.

Geten possess a Quirk that allows his to control the elements of ice. Rather than producing his own ice, however, Geten controls and manipulates the ice that's around him. He can alter the temperature of his ice, turning them from solids to liquids and vice versa, as well as using them to craft various things such as a dragon. 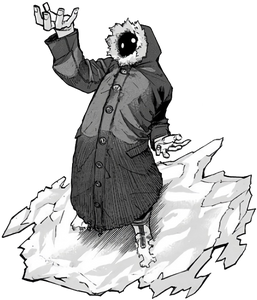