Minister of the empire

Defend his role
Increase his wealth.

Benefiting himself on the cost of others, destroying the Bartok house for insubordinence, killing Raiden out of fear for his life

Greedy Corrupt Official
Minister, later First Councillor Geza Mott, is the main antagonist of the 2015 film Last Knights. He is the corrupt minister of the empire in which the movie takes place.

He was portrayed by Aksel Hennie.

Geza Mott is the corrupt Minister of the empire, demanding bribes from the noblemen. When he invites Lord Bartok, the latter refuses to obey to Mott's rules and gifts him with a silk robe and disrespect, which deeply insults Mott. He later throws the robe to his pet dog. Mott then leads Bartok down into a cellar, where he stores all the bribes from the high lords. Bartok openly tells him that he will not bow down to the minister. Angered, Mott beats him with a wooden staff. But Bartok takes a sword from the nearby table and holds it to Mott's throat, only to be stopped by Ito, Mott's commander of knights.

After this, Mott meets with Auguste, a nobleman and father of his wife. Auguste realises that Mott beats his daughter but remains silent. Mott asks Auguste what he knows about Raiden, as he has made business with Lord Bartok before. Auguste reveals that he did not know Bartok very well. Before he leaves, Auguste is told to send Mott 1000 soldiers as guards, to what Auguste, though Hesitating, agrees.

He then has himself a giant fortress built which is said to be the most fortified place in the nation, with a drawbridge, 250 soldiers guarding day and night, a maze, a heavy iron gate that can only be opened from the inside and the castle itself. Unbeknownst to Mott however, most of Batok's knight work on the construction site with new identities, preparing an attack on Mott. Although he is mostly afraid of Raiden, the ex-commander is not one of the conspirators. He has become a broken man, drinking and gambling away his money.

Obsessed with Raiden, he continues to have Ito spy on Raiden. Although Ito tells him that Raiden sold his sword to buy alcohol, leaving all that made him a knight behind, Mott is still obsessed with the former commander, slowly going mad out of fear. At one night, he hallucinates vividly about Raiden, thinking that he is inside his chambers. When Ito arrives he sees Mott at the pool, having just drowned his pet dog. Mott, perfectly calm, tells Ito to find Bartok's family to break Raiden.

After the death of the first councillor, he is appointed as his sucessor, though the emperor orders him to stop taking bribes from noblemen and tells him that having more guards then the emperor himself is an embarrasment.

Ito, who had brought Bartok's daughter to a brothel and had her presented to Raiden as a whore, tells Mott that Raiden is completey broken, neither caring for family, honor or himself and clearly not caring for Mott. Mott starts crying out of relief, being free at last. Ito watches in silent contempt and leaves. Mott, not even realizing, congratulates his commander to a job well done, not knowing that this incident pushed Raiden back to his old self. In the same night, Raidenjoins the conspirators and they plan their assault on Motts fortress.

In the next day he is visited by Auguste, to whom he returned his soldiers,t hinking he will not longer need them. Gracious, Auguste presents Mott with a giant ornate mirror. He tells Auguste that of all gifts he received this is his favourite. After Auguste takes his leave, Mott stays in front of the mirror, laughing manically.

In the night, Raiden and his men start their assault on Mott’s fortress.The castle awakens as one of the guard manages to ring the alarm bell and Mott immediately starts screaming for his guards. When Ito arrives Mott screams at him for being wrong about Raiden.

It is revealed that Mott’s wife and her father Auguste are in league with the conspirators, with the mirror hiding one of Raiden’s men who opens the iron gates from inside of the castle.

After slaughtering all of Mott’s men including Ito, Raiden faces a terrified Mott in his chambers. After telling Raiden that he will be remembered as a traitor, he tries to attack the commander with his dagger, but is killed by a sword thrust that beheads him. 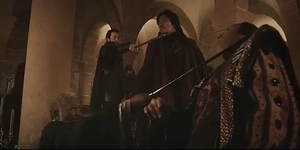 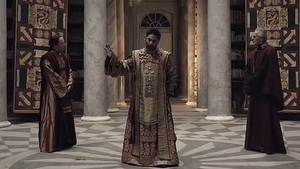 Mott with the Emperor 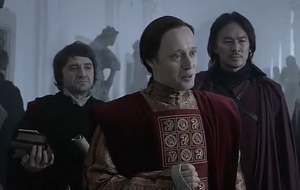 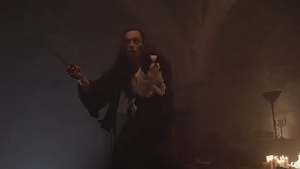 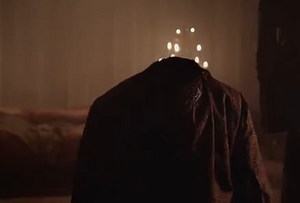 Mott's beheaded body
Add a photo to this gallery
Retrieved from "https://villains.fandom.com/wiki/Geza_Mott?oldid=4221396"
Community content is available under CC-BY-SA unless otherwise noted.