Gezora is a daikaiju, originally a simple cuttlefish mutated to an enormous size by the rogue alien virus Yog. It was one of the pawns of the alien in the 1970 Toho feature film Space Amoeba (also known as Yog, Monster From Space, or as it was known as in Japan, Gezora, Ganimes, and Kamoebas: Decisive Battle! Giant Monsters of the South Seas).

He was portrayed by the late Haruo Nakajima.

Gezora quickly established a reign of terror to a small island who prior to the monster's appearance, had legends of a similar creature. The grotesque cephalopod rose from the sea but few times, and murdered several people. Leaving only one to live, but forever scarred with horrible frost burns.

It was not until its final show of power, was the end of the monster carried out. The natives, along with some members of a Japanese expedition, lured the creature into an open field, doused with gasoline. Then, they cast a torch, turning the ground and animal into a blazing and destructive inferno.

Gezora's screams were more like an obstreperous child other than an adult, as he fled back into the sea. Unfortunately for it, it was far too late, and the animal was mortally wounded. The ocean took back its flesh and blood, swallowing the dead monster with its watery embrace. Yog retreated, casting off its deceased host in order to find another.

In Space Amoeba, Gezora could emit a cooling gas, most likely to protect it from the warm and dry atmosphere. This ability becomes specifically ineffective and useless whenever Gezora is exposed to extremes of temperature, such as when he wandered into the flames. Gezora uses his tentacles to great effect, being able to strike objects from a distance and knock them over. 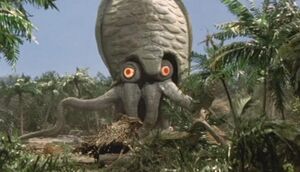 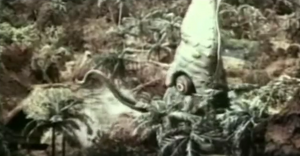 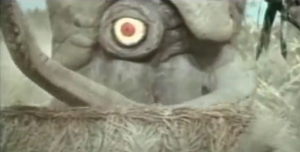