Ghadius is the main antagonist of the 1997 video game, Klonoa: Door to Phantomile and its Wii remake. He is a dark spirit who seeks to revive Nahatomb in order to engulf Phantomile into darkness as revenge for being rejected by its inhabitant.

He was voiced by Ryuzaburo Otomo in the Japanese version, and by JB Blanc in the Wii's English version.

Sick of living in the shadow, Ghadius eventually lead an attack on the Light Spirit. Despite that the Light Spirit had superior power, Ghadius overpowered the spirit, forcing the other spirits to combine their powers to defeat him. As punishment, he was sealed away in darkness for 3000 years. This only further develop Ghadiuss hatred for Phantomile and all of its inhabitants, and vowed to send the world into darkness. He eventually was able to escape the seal through an unknown method.

When Klonoa and Huepow went to investigate the strange ship that crashes into the Bell Hill, they found Ghadius, Joka, and a sleeping Lephise (In the Wii remake, it was reveal she was the one piloting the ship in order to escape Ghadius). Klonoa and Huepow eavesdrop on them, where Ghadius reveals that his plan is to keep Lephise from awaking up in order to prevent her from singing her song, the Song of Rebirth, which would bring life and light back to Phantomile, eventually bring Phantomile into darkness and nightmare. He suddenly detects the heros presence, orders Joka to take care of them, then swept Lephise under his cloak and disappears

When Klonoa and Huepow arrives at the kingdom of Jugpot, they learn that Ghadius brainwashed the king and his guard Pamela. He then reverse the flow of the waterfall making it flow up instead of down, so that the water cannot reach the forest village Forlock, which in turn kills off majority of the forest. This effects were reverted by Klonoa who saved the king and change the waterfall back to normal.

Later at Coronia, Ghadius defeats Moire, the high priest, the heads to the altar in order to use the crystal that's located in the summit to bring back the Moon Kingdom. Klonoa and Huepow follows close by, but were disregarded by Ghadius, thinking them to be mere brats. He later berates Joka for his constant failures. When questioned about his plan, he simply states that it was mere revenge. Before vanishing, Ghadius states that Lephise and the "Egg of Destruction" will bring his plan into action.

After the heros defeats Joka a final time and heads to the Moon Kingdom, they encounter him at the very top of the kingdom, referring both of them as a "strange dream" that must be eliminated to make Nahatomb's revival perfect. When Huepow questioned why Ghadius was doing this, Ghadius states that he has grown tired of Phantomile and its inhabitant that "Rejects nightmares and relies on only happy dreams" saying that is more than reason enough. Huepow states the Ghadius will be destroyed along with everything else by Nahatomb's revival, but Ghadius doesn't care, believing that it's his turn to reject the world that rejected him. Ghadius then battles the heroes himself

After a long battle, Ghadius is defeated and seemingly killed. However, his mask, still alive, states that enough nightmare energy was collected for Nahatomb's revival, and that Lephise's body will be taken over by it. He then reveals that Phantomile's dream pass through the kingdom's Gallery of Prism, which turns them into the very building block Phantomile in made of. Ghadius states that Nahatomb can not be stopped as the long as the power of dreams exist.

Huepow insist that they can still stop it with their power, but Ghadius simply replies that such dream will be eliminated by Nahatomb. He declares Phantomile is doomed, and then gives out one final evil laugh before finally vanishing for good.

For the most part, Ghadius acts as the traditional pantomime villain. When first revealed, his motives do not appear to extend beyond simple revenge and destruction. He displays little emotion, and bursts into foreboding laughter with unpredictable frequency. He has a haughty, rude, cocky, scornful, censorious, vituperative, insulting, opprobrious, disrespectful, uncomplimentary, and contemptuous nature towards the people of Phantomile - with the exception of Joka, whom he shows some fondness of. This contempt is revealed to stem from the Phantomilians reliance on light and "good dreams". Ghadius, as a King of Darkness and Nightmares, was shunned and forgotten by the people of Phantomile. This led to his belief that, if the world would abandon him, then he (in turn) may abandon the world.

He refers to Klonoa as a "strange dream". Aside from Huepow, he is the only character in the game who displays some knowledge of Klonoa's true identity.

Ghadius is also completely egotistical, manipulative, overconfident, and presumptuous, so he demonstrates views of both nihilism and narcissism. He disregards and is willing to destroy all of Phantomile simply because he is not allowed to be part of it. He considers his feelings and emotions to be above that of the Phantomilian denizens.

The game is never clear as to the limits and potential of Ghadius's powers, since he appears to be capable of anything, regardless of what the laws of gravity might state.

He may hover above the ground below him, as well as transport himself through space, either via teleportation or flying. He can brainwash and control the people of Phantomile, as seen when he manipulates the minds of King Seadoph and Pamela, doing so alters their appearance and voice.

The inner workings of his cloak are an oddity. He can keep objects inside there, and even uses it to transport himself and Klonoa to an alternate dimension (The Wheel of Woe). This implies the cloak is larger on the inside. He can grow to a size far larger than his usual form, as is seen during the battle with him. Once he has done so, he can create small, teleportation orbs that warp anyone whom comes into contact with them. He can summon dark, spherical projectiles to rain down on Klonoa and fling bullet shaped missiles surrounded by energy at him.

His mask can move independently to his cloak, to some extent - though admittedly he seemingly dies shortly after. 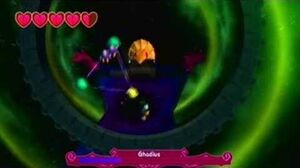 4) - Boss- Ghadius
Add a photo to this gallery

Retrieved from "https://villains.fandom.com/wiki/Ghadius?oldid=3702983"
Community content is available under CC-BY-SA unless otherwise noted.