Aid Medeus in conquring the world.

Gharnef is a major antagonist in Fire Emblem: Shadow Dragon and Fire Emblem: Mystery of the Emblem. He is a dark sorcerer who schemes to rule the world. He allies himself with Medeus, the Shadow Dragon, to help him accomplish this goal. In battle, he wields the dark tome Imhullu.

At some point before the events of Shadow Dragon, Gharnef studied under the White Sage Gotoh in the magic city of Khadein. Despite being Gotoh's best student, Gotoh was wary of Gharnef's wrathful and compassion-less nature. When Gotoh decided to name another student, Miloah, as his successor, Gharnef became outraged with jealousy and stole the Darksphere from Gotoh and fled Khadein. Using the Darksphere, he created a powerful tome called Imhullu, which ended up corrupting his soul.

Sometime afterwards, Gharnef resurrected the Shadow Dragon Medeus and forged an alliance with him to take over the continent of Archanea. After reestabling the Dolhr Empire, Gharnef and Medeus conquered the Holy Kingdom of Archanea. Shortly after this, Gharnef killed Miloah and seized control of Khadein. In addtion, he captured and brainwashed the Dragon Princess Tiki, who he ordered to defend the Fane of Raman.

During the beginning of the war, Gharnef convinced King Jiol of Gra to betray the Kingdom of Altea and side with Dolhr and blackmailed King Ludwik of Grust into allying with Dolhr by abducting his children, Yubello and Yumina. Following Altea's betrayal and defeat, along with the death of its king, Cornelius, Gharnef took possession of the Falchion, the only weapon that could kill Medeus abducted Princess Elice of Altea, who he imprisoned in Thabes. Four years later, the tides turned against Gharnef and Medeus with the return Prince Marth of Altea and his new army, the Archanean League. After conquering Grust, Marth travelled to Khadein to search for the Falchion, believing that it was taken there. While there, Gharnef briefly fought Marth and his army, who were unable to hurt, but decided to retreat. Afterwards, Marth is tasked by Gotoh with forging the Starlight tome, the only spell that could kill Gharnef.

In the final parts of the war, after both Grust and Macedon are defeated, Marth's army is teleported to Thabes in order to defeat Gharnef, retrieve the Falchion, and rescue Elice. With Marth's army now bearing the power of Starlight, the dark protection that was granted to Gharnef by Imhullu is pierced and he is killed.

Despite being killed, Gharnef's soul remained in the Darksphere. Still determined to cause the end of the world, he sought to engineer Medeus' second revival, this time by sacrifcing four noble-born Clerics. During this time, he met Eremiya, a bishop in charge of an orphanage that had lost many of her orphans to war, and brainwashed her into serving him. Under Gharnef's order, Eremiya trained her orphans into become assassins to kill anyone Gharnef deems a threat.

In addition, Gharnef decided to use one of Marth's allies, Prince Hardin of Aurelis, now the emperor of Archanea, as one of his pawns. Having fallen into a deep depression over his unrequited love for his wife Nyna, Hardin was approached by Gharnef, who, while disguised as a merchant, gave him the Darksphere. Hardin's heart was instantly twisted by the Darksphere, turning him into a malevolent tyrant, and he willingly handed Nyna over to Gharnef to use as one of the sacrifices. While Hardin began conquering the rest of the continent, Gharnef stole the Falchion from Altea Castle during its downfall and had Eremiya's assassins capture three more clerics: Princess Maria of Macedon, Princess Elice, and Lena of Macdeon. He also took possession of the Starlight tome, only for it to be later back from him by the former king of Macedon, Michalis.

Later on, after Marth killed Hardin, Gharnef and three of his followers appeared before him disguised as the four clerics. However, the light of the newly-restored Binding Shield destroyed the illusion and revealed their true forms, after which he retreated to the Dragon's Table, but not before warning Marth of Medeus' revival. Shortly after, Marth's army confronted and defeated Eremiya, after which Gharnef appeared before her and revealed that he had brainwashed her into raising assassins while delighting in her anguished screams as she died.

Following Gotoh's advice, Marth and his army went to the Dragon's Table. Deep inside the temple, Gharnef appears before Marth and tells him that Medeus is now unstoppable before engaging Marth and his army in battle. However, having earlier received the Starlight tome from Michalis, Marth's army is able to kill him again and reclaim the Falchion.

Gharnef appears in Tokyo Mirage Sessions ♯FE as a major antagonist. At least five years before the events of the game, Gharnef's spirit ends up on Earth, where he meets Yatsufusa Hatanaka, with whom he shares a common interest in reviving Medeus. During this time, Gharnef causes what would become known as the Mass Disappearance and erases the memories of Chrom and his fellow Mirages before enslaving them.

Gharnef's ultimate goal is to perform the Opera of Shadows, a ritual to resurrect Medeus that requires a huge amount of Performa. When Itsuki Aoi and his friends learn of this, they decide to complete the trials necessary to perform the Opera of Light, a ritual that can counter the Opera of Shadows. Before they can reach the final trial chamber, where the spirit of the Hero-King Marth is, Gharnef and Hatanaka arrive and steal Marth's spirit. Hatanaka, who still sees Itsuki and his friends as a threat to their plans, offers Gharnef all of his Performa so that Gharnef can destroy them. Even though he is eventuallly defeated by Itsuki and his friends, he still manages to send Marth's spirit to Medeus to prevent the Opera of Light from succeeding.

After being transported to another world, he, along with Validar and Iago, joins forces with King Oskar of Gristonne and the Chaos Dragon Velezark, and aid thems in their ongoing invasion of Aytolis. He eventually makes his way to the World Tree and blocks the road to the top, intending to stop Prince Rowan and Princess Lianna of Aytolis, who have joined forces with Marth, from claiming the two swords that can defeat Velezark. After being defeated, he is forced to retreat. Once Velezark is defeated, he is sent back to Archanea.

Gharnef only appears in a flashback in the first episode. Following Gra's betrayal of Altea and the decimation of its army by both Gra and Grust, Gharnef appears before King Cornelius and asks him to surrender, telling him that if he does, his people will be allowed to live as slaves. Cornelius refuses and attempted to attack Gharnef with the Falchion, but is killed by the Imhullu spell.

Gharnef does not appear in the main story, but as a Sorcerer SpotPass unit. He also stars in the Xenologues Lost Bloodlines and Rogues & Redeemers, fighting among the Akaneian armies and villains, respectively.

Gharnef appears as a support spirit that increases the player's fire and explosive attacks. His spirit battle is a timed battle against Robin who favors using his down special (Nosferatu) on a sleep-floor inducing Battlefield form of the Unova Pokémon League stage. 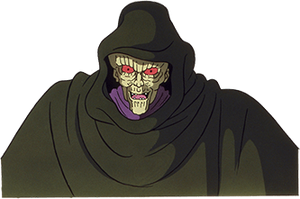 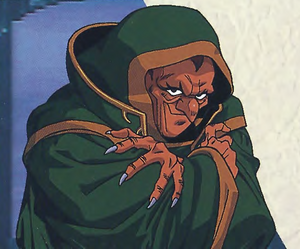 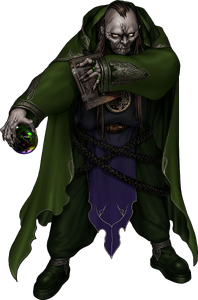 Retrieved from "https://villains.fandom.com/wiki/Gharnef?oldid=3826168"
Community content is available under CC-BY-SA unless otherwise noted.