Turn people into giggling idiots who will forever obey to his will.

Turn everyone into giggling idiots (failed).

He was portrayed by Neil Kroetsch.

The Grinner, a villain with the appearance of a jester, was originally created by a man named Sylvester Unkus, who then decided to stop and destroy the Ghastly Grinner comic as he realized he had created something evil. However, before he could, the Grinner came to life and Sylvester became his first victim. Somehow, his daughter got ahold of the comic and had kept it.

Some years after Unkus' demise, a boy named Ethan Wood came into Ms. Unkus' comic shop after receiving an invitation to its "grand opening." She gave him the comic, telling him he was worthy of it. While reading the comic in science class, his science teacher took it from him and dropped it in a fish tank. After coming home, Ethan microwaved it in an attempt to dry it off. Through unexplained reasons, however, this brought the Ghastly Grinner to life. He victimized Ethan's parents by turning them into giggling idiots who obey to his will and then took off. Ethan escaped from his house, confronting his classmate, Hooper, in the process. After explaining to her what has happened, they board a bus to go to the comic shop and see if the owner knows how to stop the Grinner. After boarding the bus, they realize that the driver is also a giggling idiot and manage to escape.

After arriving at the comic shop, Ms. Unkus reveals her relation to Sylvester Unkus and shows Ethan and Hooper the draft of the second comic. However, before she can give it to them, the Grinner appears and victimizes her.

After fleeing the Grinner, Hooper gets the idea to use a microwave-creating device she has been working on to try and destroy the Grinner. They enter the science room of their school and put the finishing touches on the device. While doing so, they are confronted by their science teacher, who is captured by the Grinner and victimized. The Grinner then attempts to victimize Ethan, but Hooper manages to rescue Ethan.

They return to the comic shop, where Hooper gives Ethan the second comic draft and drawing supplies so that he can finish it and destroy the Grinner. As Ethan finishes it, the Grinner (who had somehow managed to enter the comic shop and disguised himself as a cutout) reveals himself. Before he can victimize Hooper, Ethan sucks him back into the comic book world using the new comic book. However, the Grinner manages to get the upper hand, before finally meeting his end when Hooper erases him.

The Grinner has an extremely loud laugh which he can use to turn people into giggling idiots who drool blue slime. He is also shown to have superhuman strength, as he can lift people off the ground with little effort. It is also heavily implied that he can teleport, as he is seen unexplainably appearing in places. 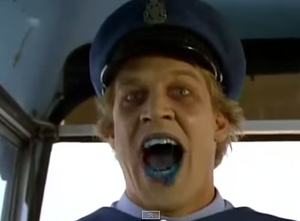 One of the Giggling Idiots. 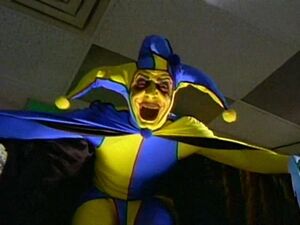 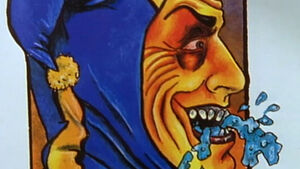 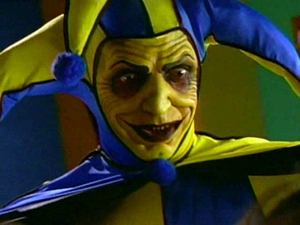 Retrieved from "https://villains.fandom.com/wiki/Ghastly_Grinner?oldid=4200686"
Community content is available under CC-BY-SA unless otherwise noted.