End the world with his family (presumed)

Ghatanothoa is a twisted god who happens to be the one of the Great Old Ones alongside his father Cthulhu and an antagonist in the Cthulhu Mythos. He first appeared in the 1935 short story "Out Of The Aeons" by H. P. Lovecraft and Hazel Heald. This monstrous being is a large, amorphous, exceptionally hideous being comparable to the Gorgon Medusa.

Ghatanothoa is a Great Old One and the first born child of Cthulhu. It is a huge, amorphous monstrosity which is so hideous, anyone who gazes upon it (or even a perfect replica) is petrified into a living mummy. The victim is permanently immobilized—the body taking on the consistency of leather and the internal organs and brain preserved indefinitely—yet remains fully aware. Only the destruction of the subject's brain can free it from its hellish prison, though the unfortunate is likely to be incurably insane long before the welcomed release.

Ghatanothoa is currently trapped underneath Mount Yaddith-Gho in sunken Mu. He was brought to Earth from the planet Yuggoth (Pluto in Lovecraft's fiction) by an ancient, alien race, possibly the Mi-go, who built a colossal fortress atop Yaddith-Gho and sealed Ghatanothoa inside the mountain beneath a large trapdoor. Ghatanothoa was worshipped by the ancient Muvians, who both feared and respected him because of his ability to turn any humans that beheld him into living, thinking mummies.

Many attempted in vain to defeat Ghatanothoa; most notably T'yog, the High Priest of Shub-Niggurath, whose story is recounted in Friedrich von Junzt's grimoire Unaussprechlichen Kulten or Nameless Cults (Robert E. Howard's answer to Lovecraft's Necronomicon). T'yog created a scroll that was supposed to protect him from the petrifying effect of gazing upon Ghatanothoa. But T'yog was defeated after Ghatanothoa's priests stole the scroll and replaced it with a fake one. This occurred in the Year of the Red Moon, which is 173,148 B.C. according to von Juntz.

Other Connections to the Cthulhu Mythos

In Lin Carter's The Xothic Legend Cycle (also known as The Xothic Legend Cycle: The Complete Mythos Fiction of Lin Carter) series of short horror stories Ghatanothoa is said to be the firstborn of Cthulhu; his siblings, in order of birth, are Ythogtha, Zoth-Ommog, and Cthylla. Colin Wilson connected Ghatanothoa to the alien, reptilian race of energy beings—the Lloigor—as the deity's servants.

Ghatanothoa appeared in the Japanese TV series Ultraman Tiga as an ancient evil that had defeated Ultraman Tiga and his fellow giants in ancient times and destroyed the civilization present on Earth at the time. In the finale, he reawakens and attempts to do the same to the modern world, covering the Earth in darkness. Tiga challenges him but the oppressive tyrant defeats him and turns him back to stone. However, Tiga is revived by humanity as Glitter Tiga and manages to overwhelm and finally kill Ghatanothoa with a powerful beam from his Color Timer. This version of Ghatanothoa bears some resemblance to a chimera of deep-sea life, including the chambered nautilus. He also appears in the Japanese anime Haiyore! Nyaruko-san as a little girl; the show parodies the Lovecraft mythos with several prominent old ones appearing as aliens disguised as Japanese school girls. 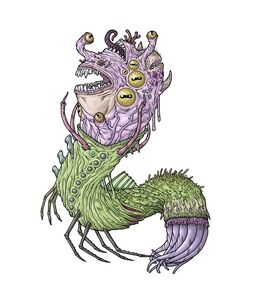 Retrieved from "https://villains.fandom.com/wiki/Ghatanothoa?oldid=3656657"
Community content is available under CC-BY-SA unless otherwise noted.