Ghiaccio is a minor antagonist in JoJo's Bizarre Adventure: Golden Wind. He is one of the members of La Squdra Esequzioni's assassins who, together with his teammates, rebels against the Boss and looks for his daughter, aiming to overthrow him and take over Passione's drug trade. He is the last member of the squad encountered by Bucciarati's group.

Ghiaccio and the rest of La Squadra started rebelling against the Boss two years prior, but after Diavolo made a gruesome example out of two of their elite assassins, Sorbet and Gelato, Risotto Nero, called off their attempted coup. Only after Risotto found out about Trish Una, Boss' daughter, they started revolting again in order to take over the drug trade.

Ghiaccio is contacted by Melone after his initial encounter with Giorno, revealing that Team Bucciarati's current location is on a parking lot south of Rome. Ghiaccio arrives a little too late and finds out that they are already gone and simultaneously hears Melone being killed via telephone.

Ghiaccio is then informed by Risotto that Bucciarati and the rest are headed towards Venice. While Giorno and Mista are driving on a highway after their retrieval of the Boss' secret disc, Ghiaccio suddenly attacks them by using his Stand, White Album, to freeze air on top of the car roof. Attempting to kill them by hypothermia, Giorno and Mista manage to knock him off the vehicle, but Ghiaccio cathes them soon by using his Stand to skate on the highway as if it were ice.

Giorno and Mista are eventually driven off the road and into the ocean where Ghiaccio starts freezing the water. Giorno then makes a raft out of a frozen land of grass which Mista uses to paddle back to solid ground. Ghiaccio then suddenly melts the ice, causing Mista to sink just before reaching the shore, trapping him when he starts freezing the water again. Mista dives underwater to see that Ghiaccio's White Album has an air hole behind his neck which is his weak spot.

Back on land, Ghiaccio freezes the air surrounding him which shields the air hole and making the bulletproof. After retrieving the disc through a struggle, he is then pushed backwards by Mista which causes a splintered lamp post to impale him through his air hole and neck. Ghiaccio then suddenly freezes his own blood but manages to stay alive only momentarily when Giorno uses his Gold Experience to repeatedly kick him against the post, impaling Ghiaccio's throat and killing him by neurogenic shock.

Ghiaccio is a man of average height and slim to medium build.

His light hair clings to his head in a low number of large spirals, and he wears a pair of thick-rimmed glasses that are broken by Mista at about halfway through the battle. Ghiaccio also keeps a blouse buttoned at the side of the chest and a band patterned trousers.

Ghiaccio wears his Stand, a light-colored, full-body suit, for the majority of his feature.

Ghiaccio is a confident assassin who, despite his quirks, is rather level-headed.

Wielding the dangerously powerful ice-based Stand, White Album, Ghiaccio is understandably confident in his abilities and disdains most of the enemy's actions, which he deems as futile. Unlike the rest of his teammates, Ghiaccio openly confronts Giorno and Mista alone (having assumed the rest of the team was nearby too) and even openly monologues his plans out loud. Conversely, when the two attempt anything against him, Ghiaccio doesn't hesitate to taunt them or ridicule their futile attempts, such as when he tells Mista to jump into the water to see whether he can really outpace White Album's freezing ability, also demonstrating his power by freezing a sizable stretch of water in an instant. His pride is expanded upon in the anime by showing him claiming that La Squadra Esecuzioni is "the best" out of all the teams in Passione. However, Ghiaccio demonstrates that he isn't simply arrogant and commends Mista for giving him a hard fight despite his weaker Stand.

Although he is extremely prideful, Ghiaccio is conscious about his weaknesses and has devised plans to alleviate his need to have an air hole on White Album. If the need presents itself, Ghiaccio is able to freeze the air to counter against projectiles and cover the air hole. Moreover, on the rare occasion he is at a disadvantage, Ghiaccio also shows he can think quickly to reverse the situation. For instance, when he is nearly impaled on a spike, Ghiaccio uses his own flowing blood to create pillars and support himself.

He has a fixation with language, expressing annoyance at the confusing wording of various metaphors as well as how foreign languages do not respect Italian words, such as spelling "Venice" in English instead of "Venezia". During these fits of anger, Ghiaccio becomes actually so unnerved he begins to sweat out of wrath and vents his frustration through breaking nearby objects or dramatic arm-waving. His choleric side is expanded upon in the anime as he is seen complaining the loudest about his team's comparatively meager revenues. 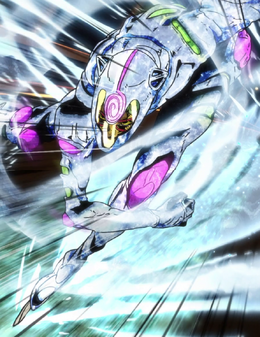 Ghiaccio's White Album is rare among Stands in that it appears as a suit for Ghiaccio to wear. Protecting its user from harm and giving him the potent ability to freeze everything, White Album is a fearsome Stand in battle. It does, however, possess a weak point in the form of a vulnerable hole at Ghiaccio's neck.

White Album's signature ability is to dramatically decrease the temperature of anything Ghiaccio touches. When the assassin touches something, the affected object's temperature decreases dramatically. White Album's power is so powerful it can reach temperatures of about -100 °C easily, freeze gasoline, and rapidly create a large quantity of ice out of sea water (faster than someone could swim). Naturally, the cold is dangerous to the human body: White Album can freeze people, dropping the temperature to the point vital functions are threatened and can solidify limbs to the point they can break like ice. As White Album drops the temperature, so does the ability of objects to move. At low enough temperatures, Ghiaccio can simply stop attacks in their tracks, making conventional attacks like gunshots or punches ineffective. Ghiaccio can also precisely control his power. He can form specific shapes of ice such as blades to ice skate on or redirect the freezing of a large body of water. Moreover, if he cancels White Album's freezing willingly, the previously affected objects immediately return to their normal temperature. If Ghiaccio stops contact with a frozen object, it will return to its normal temperature.

White Album can solidify the moisture surrounding him into an armor of ice. The armor is invulnerable to bullets as it stops their movement long before they fully penetrate, and is at least strong enough to withstand Gold Experience's punches.

White Album also enhances the physical abilities of its user. With the armor, Ghiaccio becomes strong enough to break a stone statue with a single punch or can skate so fast he's easily able to reach a car running at 80 km/h. Like an igloo, the inside of the armor is kept insulated, meaning he is always warm. The only opening in the armor is an air hole on the back of the user's neck, making it the Stand's greatest weak spot. However, Ghiaccio mitigates this by incorporating chunks of frozen air inside his armor as reserve and defrosting the air as he needs it, thus free to seal the airhole.

Gently Weeps, Ghiaccio's Sub-stand, in which he freezes all around him including the air itself. The ability is specifically meant to counter the weakness of the air hole on the back of his neck. When he activates the ability, the surroundings drops to at least -210 degrees Celcius, often even lower. The air begins to freeze and spark, and functions along like a wall of ice in the air, that only he can see. All incoming attacks will be reflected back by fragments of frozen air. Anything or anyone who gets too close will also be frozen, and stopped dead in their tracks, as no matter can move in a cryogenic world. Lowering his entire surroundings costs a lot of extra stand energy, so he usually only uses it when he believes that his standard defenses are not enough or when his weak point is discovered.

Retrieved from "https://villains.fandom.com/wiki/Ghiaccio?oldid=3496636"
Community content is available under CC-BY-SA unless otherwise noted.