Kill her sister and ex-fiance (succeeded)

Cynthia Snell, or also better known as the Ghost Bride, is the posthumous overarching antagonist of the Hey Arnold episode "Ghost Bride".

She killed her sister and former fiance before committing suicide from jumping out the window after she had been cheated at the altar. She was said to haunt the cemetery, in search of more victims which believes who attack her grave.

She was voiced by Francesca Smith.

Before her deadly deed, Cynthia was really in love with her fiancé named Jack, counting the days until their marriage, hoping that "they would always love each other and live happily ever after". But however, on the day she was supposed to be married, as several hours passed, Cynthia realized that Jack had skipped the wedding and left her standing at the altar. She soon discovered that Jack cheated on her because he fell in love with her sister Courtney. they were married the next day. That very night, Cynthia put on her wedding dress and found a sharp axe, walked 13 blocks to her sister's house. Courtney and Jack were asleep, and Cynthia axed them to death. When the police arrived, they found her sitting in her rocking chair next to the dead bodies throwing rice and smiling while humming the Wedding March. She then jumped out the window committing suicide when they arrived in order to avoid being arrested.

Every year after the incident on its anniversary, she rise up from her grave looking for more victims. 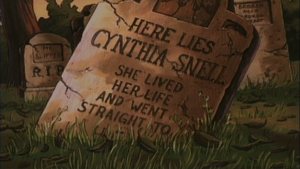 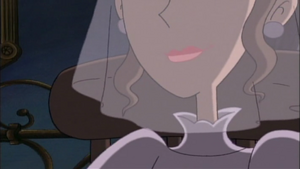