The unnamed Ghost Girl is the main antagonist of the 2017 Colombian short fan film Innocent Souls, which won the "My Annabelle Creation" Contest and was made a part of the official The Conjuring Universe canon. She is a mysterious, ghostly entity who stalks children who come into her home.

Several children enter an abandoned house, daring each other to spend the night there. The children wander through the old house, looking for candles or other sources of light.

One boy tries using a lighter to light his way, but a mysterious wind keeps blowing it out. As he flicks it back on, he fails to see the ghostly face of the girl peering over his shoulder.

Another boy searches the basement with a flashlight, and stumbles upon stored Halloween decorations and a Ouija board. The boy pulls back some sheets to reveal the ghostly apparition of a past victim of the girl, sobbing and profusely bleeding from her mouth.

The boy backs into the other boy, scaring them both. They try to rationalize what the one boy saw, and even look behind the sheets again to find the ghost gone. However, when they turn around, they are confronted by the ghost girl and scream.

Their fates and the fates of the other children in the house are left unknown. 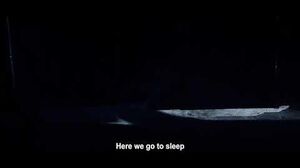 Retrieved from "https://villains.fandom.com/wiki/Ghost_Girl_(The_Conjuring_Universe)?oldid=3557254"
Community content is available under CC-BY-SA unless otherwise noted.