Ghost Kotsuzuka (or Bonz in the 4Kids dub) is one of Bandit Keith's three henchman in Yu-Gi-Oh!. Kotsuzuka is a kid with a hideous ghoulish face.

He was voiced by Masami Suzuki in the Japanese version, and by Amy Birnbaum in the English version.

Kotsuzuka, Takaido, and Satake attacked Katsuya Jonouchi, whom Keith picked on as bad as Kaiba did, and took him to a cave where Kotsuzuka dueled Jonouchi while following Keith's instructions. Kotsuzuka used a card to resurrect his destroyed monsters as zombies, who were mostly invincible. Jonouchi's Time Magician could have defeated them, but unfortunately, it landed on a skull. Kotsuzuka lost to Jonouchi when he used the Shield in the Right Hand, Sword in the Left Hand card, but Keith had them seal the tunnel with a boulder when they left to trap them all inside. He then beat up Kotsuzuka, along with Takaido and Satake, and stole their Star Chips.

Kotsuzuka, Takaido and Satake entered Kaiba's tournament in Battle City. Rather than duel for them, they put on zombie masks and scared people at the cemetery to steal their Locator Cards. They attempted to do this to Yami Bakura, but he was unaffected by it, and dueled Kotsuzuka, taking the duel to Hell. Yami Bakura gained the advantage, and soon told them that they were in Hell, and if Kotsuzuka lost, they would be trapped there forever (or at least until Yami Bakura chose to set them free). Yami Bakura defeated Kotsuzuka, so he, Takaido and Satake became trapped in Hell, vanishing into shadowy clouds in the ground. Yami Bakura then took their Locator Cards so he could enter the final rounds.

He has not been seen since. In the 4Kids version, they were sent to the Shadow Realm rather than Hell (though there is little difference between the two), with hands pulling them into the ground. 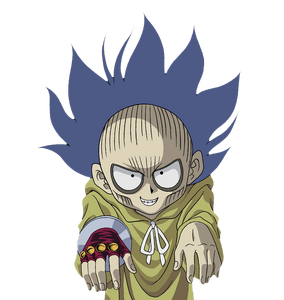