The Ghost Pirate is one of the bosses in the GBA game Banjo Kazooie: Grunty's Revenge.

The Ghost Pirates never shows his whole body. All is seen of him is a skull with an eyepatch on his right eye, and a red bandana on his head. However his pirate ship is always seen. It looks like an average pirate ship, that's white like a ghost.

The Ghost Pirate only appears in one level; The Breegull Beach. All you do is shoot three Blue Eggs at him to defeat him, while at the same time avoiding cannonballs.

After Banjo rescues Kazooie and learns how to shoot eggs at enemies, they can fight him by stepping on the yellow skull indicating where the Ghost Pirate is located. He mentions that he has a treasure on his ship, and if they hit him three times they can have the treasure. After he is defeated his ship goes back underwater, never to be seen again. 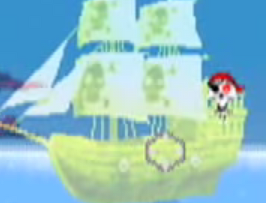 Retrieved from "https://villains.fandom.com/wiki/Ghost_Pirate?oldid=3587144"
Community content is available under CC-BY-SA unless otherwise noted.