Ability to move without anyone at the helm

Crashing through whatever stands before them.

Possessed Objects
Ghost Trains are what considered to be phantom vehicles in the form of a locomotive or train. These haunted trains would keep going and they are fully operational but without anyone at the helm. 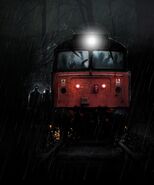