Patron of Arachnos
Admin of the Seer-Net

Ghost Widow is a character in the online video-game City of Heroes, and was added along with the rest of the super-villain organization, Arachnos, in the expansion of City of Villains that allowed for players to play as super-villains as well as super heroes. Ghost Widow is one of four patrons to the leader of Arachnos, Lord Recluse. As a patron of Arachnos she is one of Lord Recluse's four right-hand super villains and among the most infamous villains in the game. Ghost Widow is the head of Arachnos's psychic assassins and spies, the Night Widows. Notably, she is not a meta-human with ghost-like abilities, but is in fact an actual ghost.

In 1989 Belladonna Vetrano was killed during a mission for Arachnos. The target was a member of The Family, but the finer details of the mission are never disclosed. Belladonna and her team were authorized to use lethal force however, when cornered the gangster set off an explosion, killing most of the team except for a soldier named Paolo Marino, Belladonna's lover and leader of the team's tactical support. After the explosion, Arachnos deployed a follow-up team lead by the mystic known as Mu'Rakir, who reported seeing Belladonna's angry ghost slaughter the rest of his team. Lord Recluse sent his Mu mystics back to the site to free Belladonna from being bound by vengeance, by instead bonding her to Arachnos. As a result of the ritual to reassign her unfinished business, Ghost Widow can move freely beyond the place of her death, something distringushing her from most other ghosts in-universe. She was re-christened as Ghost Widow and her freedom from the confines of normal rules of haunting combined with her expert training as a psychic assassin in life saw her quickly promoted to a Patron of Arachnos. However as it is her unfinished business now, the very thing that anchors her to the world of the living also binds her to Lord Recluse's service. Ghost Widow retains her free-will more or less but is compelled to obey Lord Recluse's direct commands. Over the years Ghost Widow has grown weary of her unconditional, ceaseless subjugation but can not leave Lord Recluse's service. Because her service to Arachnos now IS her unfinished business Ghost Widow can no more stop serving them than she could will herself out of existence and her waning personal loyalty to Arachnos or desire to retire are non-factors - she is simply instinctively compelled to obey Lord Recluse above even her own personal desires.

A good example of Ghost Widow's fealty in-spite of her personal feelings is the Strike-Force against Reichsman. Once the player villains of the Strike-Force find that Reichman had a device that protected him unless fed other overriding superpowers, they sought the help of Lord Recluse to trigger the machine to fight Reichsman. Lord Recluse was willing to have his Patrons walk into a power sapping trap in order to stop the villain Reichsman, so he ordered them to do so to help the player villains, who were leading the charge. Ghost Widow was the only Patron who realized before-hand she would be sacrificed and went along anyway simply because she was commanded to, however she was not commanded to cooperate once there and so once she was in front of the power-sapping trap she turned on the player characters, saying she would aid Arachnos because she had to but that she refused to go without a fight. Lord Recluse made her the head of the Night Widow division of Arachnos and she establishes training methods for the Night Widows and Fortunatas both in talent and loyalty. Ghost Widow has a superiority complex as well as noticeable paranoia. She considers herself more talented than the rest of Lord Recluse's inner circle and is always suspicious that they may try to strike at her in their envy of her talents. She considers, Captain Mako and Black Scorpion to be barbaric and petty and thinks Scirocco's kind demeanor is some sort of smokescreen, all of which has lead to her combination of paranoia and egotism among her fellow patrons.

Ghost Widow has the ability phase-shift through objects, become partially or completely invisible and has the power to fly, traits common to all ghosts. She has enough mastery over her ethereal state to siphon the life-force right out a person's body as a few random members of Arachnos have witnessed her reaching into people's chests and ripping out their souls resulting in instant death. Ghost Widow has the power to draw negative energy from the after-life which she can project or radiate as dark blasts. Presumably she still has physical training as a Night Widow but it is rarely seen employed since she has ghostly powers now to rely upon to surpass the physical world. Ghost Widow has displayed extra-sensory perception which allows her to sense other ghosts and has a telepathic link to members of the Night Widows and Fortunatas via the Seer-Network. Ghost Widow's favorite move is called Soul Storm, a hold move which affects all levels regardless of resistances or rank, the move summons the souls of those Ghost Widow has slain to bind and levitate her foe in the air as their life force wastes away. Though Soul-Storm only restrains her foes for a few seconds it's irresistible nature combined with the opening it gives her to attack the helpless for are the stuff of modern-day ghost stories among the forces of good.

The Arachnos' Seer Net is a telepathic wave-length for it's psychic division, the Night Widows. Night Widows are actually composed of two sets. The first group are the Night-Widows that have training in martial combat especially agility, weapon finesse and have expert experience remaining unseen. The Second Group are called the Fortunatas or simple “Seers”. Fortunatas are put through extensive training regiments designed to draw out and enhance psychic powers. Fortunatas are capable of using telekinesis, mental suggestion, mental domination, clairvoyance and projecting psionic blasts. Night Widows used to be all female but in recent years the Widow training has expanded to men as well. Ghost Widow tends to send Night Widows into assassination missions and Fortunatas on spy missions. Lord Recluse is not a psychic and so he can not actively coordinate the network without a psychic near-by to connect him to it. Due to her inability to defy or plot against him and her psychic talents, to say nothing of her role as a potentially eternal agent that never needs to be replaced, Lord Recluse had made Ghost Widow his proxy for issuing orders to the network.

As the current administrator of the Seer-Network Ghost Widow has control over both groups. Despite the power the Seer-Net gives her, it was given the subconsciously imposed mind-set of Red Widow, Lord Recluse's slain lover, as tribute and as such Ghost Widow resents that even her most intimate and valuable psychic tool and army were constructed in the mind-set of someone else, a mind-set imposed upon her and which she is forced to impose upon others in-turn. 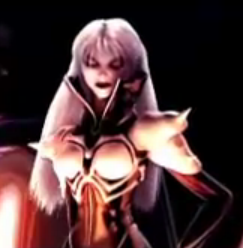 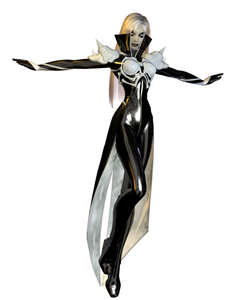 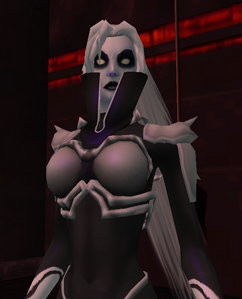 Add a photo to this gallery
Retrieved from "https://villains.fandom.com/wiki/Ghost_Widow?oldid=3273181"
Community content is available under CC-BY-SA unless otherwise noted.