The Ghost of Christmas Never was the disguise of Nanette Musette, the housemaid of Winslow Neckleby, and appeared in the 1984 The New Scooby-Doo Mysteries animated series episode "The Nutcracker Scoob".

Nanette wanted to steal a valuable emerald hidden in the children's home inside an antique nutcracker ornament. Mystery Inc. arrived at the home to aid in their Christmas pageant.

The ghost first appeared during rehearsal, while Shaggy acted out the part of Ebenezer Scrooge. At first the gang suspected Mr. Neckleby himself. On a visit to his house, both they and Nanette overheard the reading of a will. This led them all to believe the emerald was in a star in the attic. A chase ensued, during which Scooby, Shaggy, and Scrappy captured the Ghost. However, the ghost got away and the star was empty.

Finally, at the pageant, everyone realized the emerald was in the nutcracker. The ghost jumped on stage and snatched it off the Christmas tree. After stealing the nutcracker, the ghost fled in a sleigh, and the gang gave chase on skis. The chase ended when the sleigh crashed, and Nanette was unmasked and arrested. 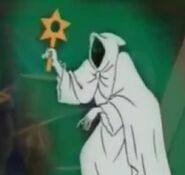 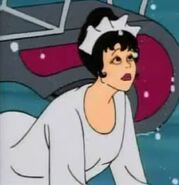 Retrieved from "https://villains.fandom.com/wiki/Ghost_of_Christmas_Never?oldid=3751466"
Community content is available under CC-BY-SA unless otherwise noted.