Goal depends on the wearer

Ghostface is the psychotic killer identity and the main antagonistic force from the Scream horror franchise. He is a fictional persona and costume adopted by the main antagonists of the Scream series as a disguise to conceal their identity. The character is voiced by Roger L. Jackson, regardless of who is behind the mask. At least seven people have used the Ghostface identity (ten if the TV series is counted).

The mask is based on The Scream painting by Edvard Munch and ghosts that appeared in a Betty Bop cartoon.

In Scream, the identity is temporarily adopted by the killers' target, Sidney Prescott, using it against them. In the Scream universe, the costume is not unique and is easily obtainable, allowing others to wear a similar outfit. Ghostface often calls its targets to taunt or threaten them while using a voice changer that hides its true identity. In Scream 3, this is taken further by Roman Bridger who uses a device that enables him to sound like several other characters in order to manipulate targets. The changing identity of the person beneath the mask means that Ghostface has no definite motivation, ranging from revenge and seeking fame to "peer pressure". However, each killer shares the common goal of killing Sidney due to a chain of events indirectly caused by her mother Maureen Prescott.

Initially, Billy Loomis created the identity with Stu Macher in order to kill Sidney because of her mother's affair with Billy's father which triggered his mother to leave, after a short killing spree in the fictional Northern California town of Woodsboro. The Ghostface persona remains the same throughout the Scream series, featuring a black hood and cloak with a jagged base and a white rubber-mask resembling a ghost with a screaming expression. Though each iteration of Ghostface is human, they often exhibit extreme durability against physical harm, high levels of physical strength, and an almost supernatural stealth ability; able to appear and disappear in seemingly impossible situations. The character has often appeared in popular culture since its inception, referenced in film and television as well as spawning a series of action figures and merchandise.

The Ghostface mask itself was originally created by Fun World Div. Easter Unlimited, Inc. employee Brigitte Sleiertin for a series of masks titled "Fantastic Faces" released as Halloween masks in the early 1990's by Fun World. The mask was given the trademarked name of "GhostFace" by Fun World licensing director R.J. Torbert in 1999-2000. The Ghostface mask also returned in The Face of Fear, a novel written by Torbert himself. Ghostface was also given the trademarked name "The Icon of Halloween" in 2010-2011 by Torbert as well for the Scream 4 hype.

Ghostface first appears in the opening scene of Scream (1996). The character, voiced by Roger L. Jackson, calls and taunts teenager Casey Becker with horror clichés and trivia questions, eventually murdering her boyfriend Steve Orth in front of her before she herself is killed. The identity has been adopted by the primary antagonists of each successive film to conceal their identity, prior to being revealed in each films' final act. Ghostface's first cinematic appearance was in Scream (1996) where the identity was used by a killer stalking the fictional town of Woodsboro. After the killing spree begins, Sidney Prescott begins receiving taunting and threatening phone calls from Ghostface who claims knowledge of her mother Maureen Prescott's brutal rape and murder, one year prior to the events of the film; a murder that was blamed on Cotton Weary. The Ghostface disguise allows suspicion to fall on many people, including Sidney's boyfriend, Billy Loomis; her father, Neil Prescott (Lawrence Hecht); her friend, Randy Meeks (Jamie Kennedy); and her schoolmate, Stu Macher. Ghostface is revealed in the finale as both Billy and Stu, who reveal that they murdered Sidney's mother and framed Cotton. Billy cites his motivation as abandonment by his mother (Laurie Metcalf), brought about by his father Hank's affair with Maureen, while Stu cites "peer pressure". Sidney is able to gain an advantage against Billy and Stu, temporarily adopting the Ghostface persona herself to taunt them before killing Stu. Gale Weathers shoots Billy to stop him from killing Sidney, who then finishes Billy off with a bullet to the head.

Ghostface's second appearance was in Scream 2 (1997) where it was again used as a disguise by the main antagonists. A series of murders occur at Windsor College, Sidney's current location, with the initial victims sharing names with Billy and Stu's victims from Scream. The killers again taunt Sidney and attempt to kill her and later kill Randy. The Ghostface disguise allows suspicion to fall on several characters, including Cotton, again, and Sidney's boyfriend Derek. However, Mickey, a friend of Derek, reveals himself as the killer, seeking fame for his prolific exploits. Mickey's accomplice is revealed to be Billy's mother, under the alias Debbie Salt, who is seeking revenge against Sidney for her son's death. Mrs. Loomis shoots Mickey, claiming to have indulged his desire for fame and carnage only to enlist his help in enacting her revenge, and tries to kill Sidney. With help from the exonerated Cotton, Sidney survives and Mrs. Loomis is killed. Seconds later, Mickey springs to his feet screaming, but is quickly shot to death by Gale and Sidney.

The story continues in Scream 3 (2000) where the identity of Ghostface is used to murder Cotton and his girlfriend Christine, in an attempt to discover the now-hidden Sidney's location. The killer leaves images of Maureen at the crime scenes to draw Sidney out of seclusion while murdering the cast of "Stab 3", the film within a film based on Sidney and her experiences with Ghostface. Ghostface is revealed as Sidney's half-brother Roman Bridger, born to their mother Maureen during a two-year period when she moved to Hollywood to become an actress under the name Rina Reynolds. After being gang-raped and impregnated at a party, she gave Roman up for adoption who, as an adult, sought her out, only to be rejected, denying she had ever been Rina. Roman began stalking Maureen and filming her adulterous liaisons with other men including Hank. He used this footage to reveal to Billy why his mother had "abandoned" him before convincing him to kill Maureen, sparking the chain of events in Scream and Scream 2. With Sidney's help, her friend Dewey Riley manages to kill Roman, ending the series of murders based on his revenge against Maureen.

In Scream 4 (2011), another Ghostface killer emerges in Woodsboro on the fifteen-year anniversary of the massacre conducted by Billy and Stu; the new killer recreating events from the incident but also filming the murders. Ghostface kills several teenagers and police officers before being unmasked as Sidney's cousin Jill Roberts (Emma Roberts) and her friend Charlie Walker who intend to kill Sidney, frame Jill's ex-boyfriend Trevor Shelton and become the current generation's "Sidney" and "Randy Meeks", with the accompanying fame of being the "survivors" of the massacre. Jill betrays Charlie and stabs him through the heart and stomach and then seemingly kills Sidney, before purposely injuring and stabbing herself to make herself appear a victim. After being taken to hospital, Dewey informs her that Sidney has survived. Jill attempts to end her life but is stalled by Dewey, Gale and Judy Hicks long enough for Sidney to shoot her through the heart, killing her.

Ghostface is once again the main antagonist of this series, however, the mask and robe is different and they are never referred to as Ghostface onscreen, only behind the scenes. Ghostface is revealed to be Piper Shaw, who is assisted by Kieran Wilcox.

The Face of Fear

Ghostface returns in The Face of Fear, a novel written by Fun World licensing director R.J. Torbert himself. In the book, there are multiple killers who wear different versions of the mask. A group of criminals called the Winters brothers wear the "scarecrow", "zombie", and "mummy" versions of the mask, while another "vigilante" killer wears the classic white mask. The vigilante killer's mask has a distinctive blood splatter, which is featured on the cover of the book. As opposed to wearing a robe like in the Scream movies, the vigilante killer wears all black clothing, such as a black shirt, pants, and leather gloves.

The phenomenon starts in the novel when local resident of Long Island, New York Deborah Lance is kidnapped and held hostage by the Winters brothers. 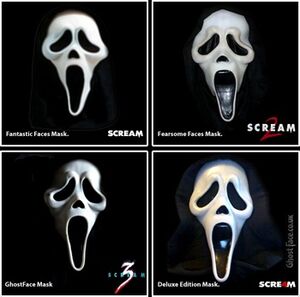 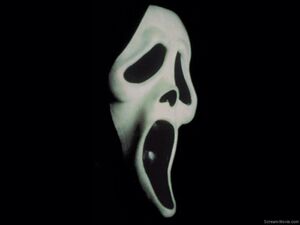 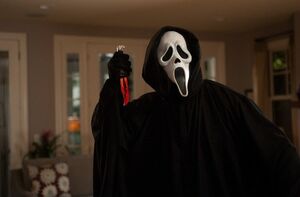 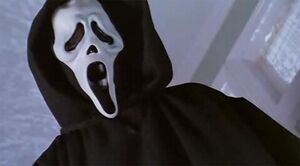 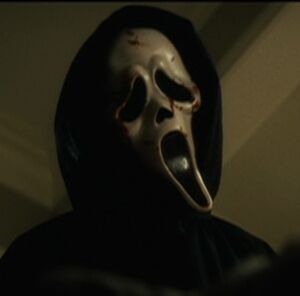 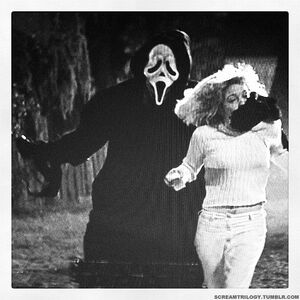 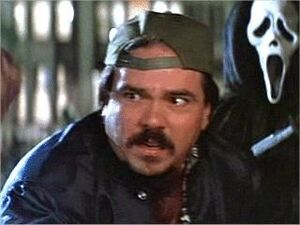 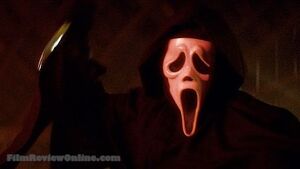 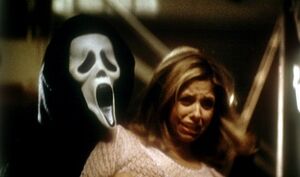 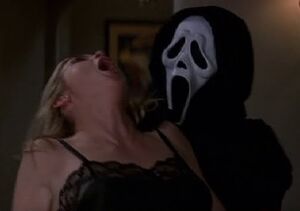 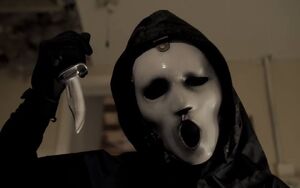 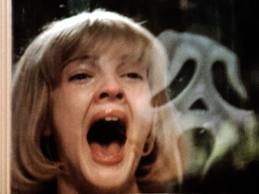 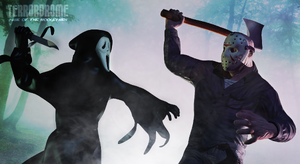 Ghostface Meets Jason Voorhees
Add a photo to this gallery 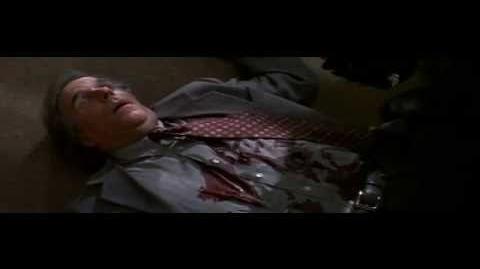 Scream - Principal Himbry's Death
Add a photo to this gallery

Retrieved from "https://villains.fandom.com/wiki/Ghostface_(Scream)?oldid=2445170"
Community content is available under CC-BY-SA unless otherwise noted.