Kill Luigi whenever they can.

Mischievous Ghosts
The Ghosts, also known as Regular Ghosts, are recurring enemies that appear in Luigi's Mansion franchise. They are the common ghosts Luigi encounters in every game. They come in different forms, shapes and even types. While in the first game they were created by Vincent Van Gore, in the sequel, Luigi's Mansion: Dark Moon, the ghosts actually went mad after King Boo destroyed the Dark Moon. In Luigi's Mansion 3, the Ghosts were under the mind control of King Boo and served Hellen Gravely.

In Luigi's Mansion, the ghosts appear as common enemies that appear in all areas of the mansion. Whenever Luigi vacuums enough ghosts in a dark room, the room lights up meaning the area is cleaned. As Luigi progresses in the game, he will encounter stronger ghosts in the next areas of the mansion. Upon reaching the Art Studio, it is revealed that most of the mansions ghosts are creations of Vincent Van Gore, who paints ghost portraits and brings them to life. However once Vincent is captured by Luigi, most of the ghosts haunting the mansion will disappear.

In the second game, the ghosts from Evershade Valley became mad when King Boo destroyed the Dark Moon, causing the former friends of Professor Elvin Gadd to turn on him. Fortunately, Luigi manages to fix the Dark Moon and the ghosts became friendly again. Like the previous game, stronger ghosts will gradually appear as Luigi makes progress, but eventually an even stronger variant of the ghosts are introduced and their encounters become more frequent nearing the games end.

The ghosts in this game act as staff at the Last Resort hotel who seek out Luigi for King Boo under the orders of Hellen Gravely. Stronger ghost will again appear over time but not longer cause damage if Luigi is dragged across the ground while trying to catch them. At the end of the game the regular ghosts escape E. Gadd's ghost containment chamber before it is implied that they were under the control of King Boo. They regain their senses after King Boo's residue energy is exhausted from his crown jewel and are shocked to find the Last Resort destroyed. However E. Gadd, Luigi and their allies help the ghosts build a new building in its place.

In Luigi's Mansion: Dark Moon, unique types of regular ghosts can be found in the ScareScraper which serve as bosses on every fifth floor. These ghosts have more abilities than other ghosts and come various different variants.

Beetle Whispers are boss versions of Beetles that can cause shockwaves with their attacks. If a player tries to catch a Beetle Whisper, it will cast a shield around itself that can be broken using Power Surges. It will also attract Beetles, Sneakers and different variants of Greenies.

Bomb Brothers are boss versions of Greenies which are first found carrying a giant bomb. Using the Dark-Light Device on the ghosts will make them drop it, causing the bomb to soon detonate. While trying to catch Bomb Brothers, They will throw smaller bombs that the players must evade while also watching out for Greenies and Strong Greenies that appear in the area.

Creeper Launchers and boss versions of Gobbers which can produce purple goop that will form in miniature Creepers. If too many small Creepers are in the area, they can form together into a big Creeper. The player must be cautious when trying to catch a Creeper Launcher, as it can perform a shockwave attack to break free of the Poltergusts vacuum. However, this attack can be cancelled out using Power Surges. Creeper Launchers will also summon Hiders and various Greenie variants to aid them. 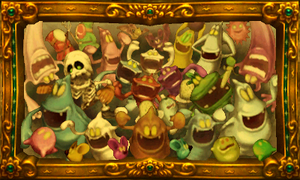