The Ghosts are the main antagonists of the Pac-Man franchise. They chase Pac-Man around a maze to keep him from eating all of the dots. It was the player's objective to avoid the ghosts and collect all of the dots.

Power Pellets are the ghosts' ultimate weakness. When Pac-Man eats one, the ghosts turn blue, and Pac-Man can eat them.

In the original Pac-Man, there were four ghosts (referred to as the Ghost Gang), each member having their own unique personalities:

In the Pac-Man cartoon series from 1982 to 1984, the Ghost Gang work for Mezmeron and help him try to find the Power Pellet Forest and often call Pac-Man names such as "Pac-Fink".

In the TV series Pac-Man and the Ghostly Adventures, the Ghost Gang work for Lord Betrayus but secretly they help Pac-Man foil Betrayus' plans and hopefully get their bodies back.

The Ghost Gang appears as supporting characters in Disney's 2012 film Wreck-It-Ralph. While Blinky, Inky, and Pinky can be seen in Game Central Station, Clyde leads the Bad-Anon support group in the Pac-Man game consisting of iconic villains including Dr. Eggman, M. Bison, and Bowser. Clyde is also one of the villains to react when Ralph reveals he does not want to be a bad guy anymore, by turning blue. When Ralph laments how he gets no respect from the others in his game, Clyde suggests that he will just have to accept who he is.

The Ghost Gang makes a cameo in the 2018 sequel Ralph Breaks the Internet.

The Ghost Gang appears as an Assist Trophy. When summoned, they wander around the stage as if it was a maze, dealing damage to fighters when collided with. After a few seconds, their movement becomes faster until they wander off. Each Ghost moves similar to the arcade games: Blinky takes the shortest route to reach the enemy, Pinky tries to move in front, Inky moves from behind, and Clyde moves randomly.

In the 3DS version, the Ghosts are hazards for the Pac-Maze stage. They randomly move about the lanes, damaging fighters when contacted. Grabbing a Power Pellet turns the Ghosts blue, and touching them will temporarily bring them out of the battlefield.

The Ghost Gang returns as an Assist Trophy, reacting just as they did in Super Smash Bros. for Wii U and 3DS. The only difference is that they can be defeated by taking enough hits. They will telegraph their defeat by turning blue before fleeing.

The Ghosts also appear as a primary shield-type spirit. Their spirit battle is against a red Kirby (Blinky), Jigglypuff (Pinky), Squirtle (Inky), and Pac-Man (Clyde) on the Battlefield form of Pac-Land. The Ghost Assist Trophy can also be summoned at random. A blue Ghost named TURN-TO-BLUE also appears as a support spirit, which grants the fighter an increase to their speed at the cost of starting the battle at 30% damage. Its spirit battle is a timed battle against four Mr. Game & Watch on the Wrecking Crew stage who tend to avoid conflict. 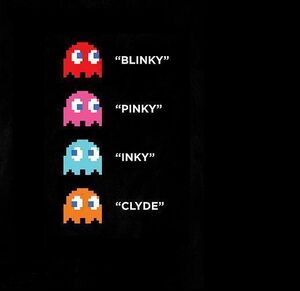 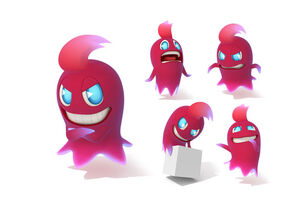 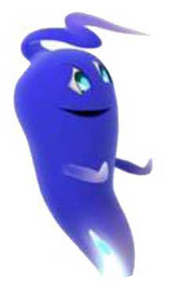 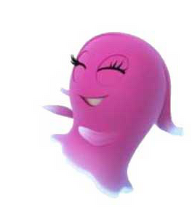 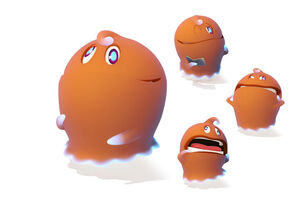 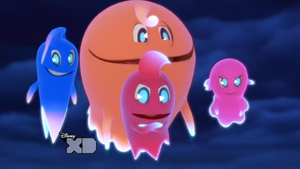 The redesigned Ghost Gang from Pac-Man & the Ghostly Adventures. 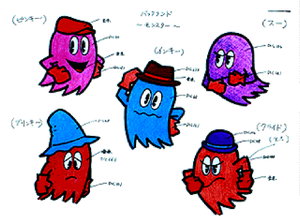 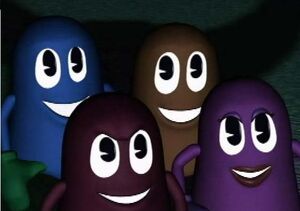 The Ghost Gang as seen in the Pac-Man World series. 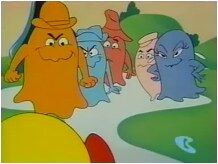 The Ghost Gang as seen in the Hanna Barbera Pac-Man cartoon. Clyde is orange, Inky is blue, Blinky is red, Pinky is pink, and Sue is purple. 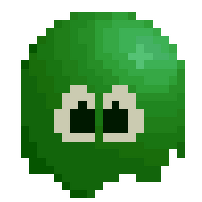 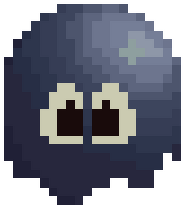 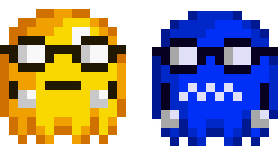 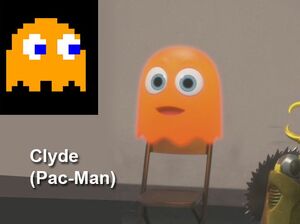 Clyde as seen in Disney's Wreck-It-Ralph. 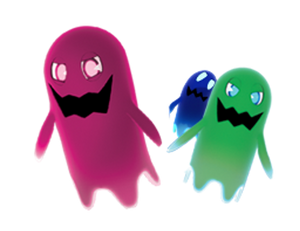 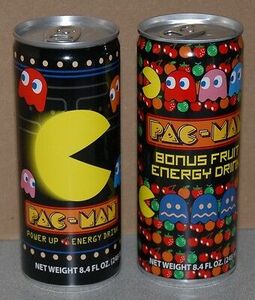