Warn Solomons to leave their residence (even if they have to cause some physical harms).

Get revenge on John Rollins who murdered them (accomplished).

The Ghosts (named Michael Rollins, Lindsay Rollins and Mary Rollins) are antagonists in the 2007 film The Messengers.

The ghosts were in fact Mary Rollins and her two kids Michael and Lindsay. 5 years prior to the story, the family were murdered at their home. 5 years later, when the Solomon family moved into their house from Chicago, they reappeared as ghosts and began tormenting Jess and Ben, in which the parents didn’t believe Jess, and Ben who was unable to speak due to a car accident that Jess caused due to Jess being drunk, was unable to confirm her story.

Jess is becoming determined to prove her story, and then she learned from her new friend Bobby about the Rollins family that used to live in the house. She suspected that something bad happened to them.

The ghosts finally revealed themselves to Jess' mother Denise. Realizing that Jess was right, she becomes determined to leave. Outside, John Burwell, the man Jess' father Roy hired to work on the sunflower farm, was attacked by a flock of crows

Meanwhile, at the feed store, Jess found out that the Rollins family were the ghosts that haunted the house when she saw a newspaper clipping of the family, and she also discovered that Burwell was in fact the Rollins' patriarch.

After being attacked by the crows, John becomes delusional and when he saw Denise bringing bags to the porch, he believes that Denise is his wife, Mary and starts to attack her, but she ran and takes Ben to the cellar.

As it turns out, John was responsible for murdering his entire family in a fit of madness of his wife trying to leave him.

When Jess and Bobby came back, John knocked out Bobby, causing Jess to run to cellar where she found Denise and Ben. Denise apologized to Jess for not believing her and that she saw the ghost as well. John broke the cellar door open and began looking for them, thinking that Jess is his daughter Lindsay, and Ben was his son Michael.

While John torments Jess, the ghosts of his slain family arose from the mud. Just as John was about to stab Jess, she rolled her body in the nick of time and causing the pitchfork to get stuck on the floor. When he struggled to get it free, Jess who told him that her family isn’t his, kicked him into the mud where the ghosts of his family got their revenge by pulling him down to join them, but not before he attempted to pull Jess down with him before her parents saved her.

With their work complete, the ghosts stop appearing and the crows no longer attack. 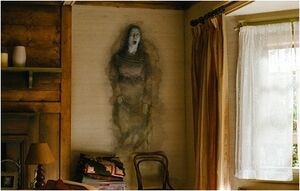 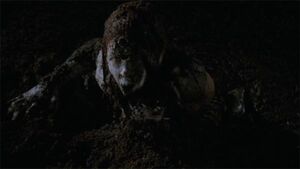 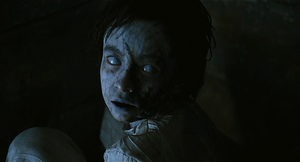 Add a photo to this gallery
Retrieved from "https://villains.fandom.com/wiki/Ghosts_(The_Messengers)?oldid=3559834"
Community content is available under CC-BY-SA unless otherwise noted.