Thrill-seeker
Member of the Jokerz gang

Having in causing mischeif and mayham.

Help the Jokerz in taking over Gotham City.

Help the Joker in his return to power (both failed).

Ghoul (real name: Stewart Winthrop III) is an antagonist in Batman Beyond: Return of the Joker. He was one of the Jokerz who followed the rejuvenated Joker. He was heavily into techno-goth music and has adapted the horror look into his costume. Ghoul was never without his plastic Halloween pumpkin which he kept filled with a number of monster-inspired weapons and tricks.

He is voiced by Michael Rosenbaum.

Stewart Winthrop III was born into a wealthy family, but ran away shortly after to join the Jokerz for kicks. He joined a sub-gang of the Jokerz before the group soon fell under the control of Joker. He served as the group's techie, manning the computers and technical equipment. He was usually paired up with Woof before the police arrested the gang.

Much like his Kevin Spacey impression that formed the basis of Deadshot's voice performance, Michael Rosenbaum based the voice of Ghoul on actor Christopher Walken. Both Spacey and Walken have played a DC Comics villain, with Spacey portraying Lex Luthor in Superman Returns and Walken portraying Max Schreck Batman Returns.

In the alternate future created by Chronos, Ghoul was upgraded to have a robotic buzz saw implated in place of his arm, and was shown to be able to retract that and swap between his arm and the buzz saw. In addition, like the energy whips of the alternate timeline Dee-Dee, the destructive sparklers released from his exploding Jack O' Lantern are composed of an unknown energy that can easily pierce the energy shields and constructs of Green Lanterns.

Ghoul is not much of a physical fighter, virtually always being the easiest member of the gang Batman has beaten (usually with one punch). He does seem to have a vast knowledge of technology, as he was able to locate equipment for The Joker's plan. With his upgrades in an alternate future, he was considerably much more of a threat although he was still brought down easily when confronted by the League. 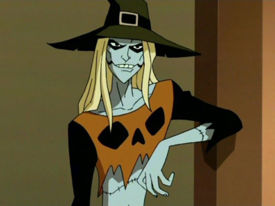 Ghoul in Batman Beyond: Return of the Joker. 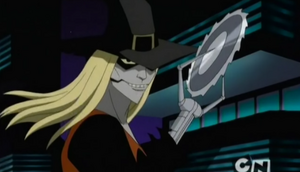 Ghoul with his robotic buzz saw in Justice League Unlimited.
Add a photo to this gallery

Retrieved from "https://villains.fandom.com/wiki/Ghoul?oldid=3839767"
Community content is available under CC-BY-SA unless otherwise noted.