Wealth
Money
Safety and cover from the CCG
Scrappers

Kill human guests and eat them for fun (both failed).

Sadistic Cult
The Ghoul Restaurant (in Japanese: 喰種 レストラン, Gūru Resutoran) is a supporting antagonistic faction the Tokyo Ghoul series. It is a secret society comprised of mainly rich/upper-class ghouls and are able to avoid being caught by the C.C.G. of which they are trying to run away from. They were stationed in the 7th Ward as their main headquarters but it was destroyed by Ken Kaneki's group in the process.

The Ghoul Restaurant makes its first appearance in the Gourmet Arc where Ken Kaneki is being lured along with another woman known as Ami have both been lured in by Shuu Tsukiyama and Kichimura Washuu. Ami kicks Kaneki into the public arena where he is forced to face Taro-chan after he had murdered Ami. There, the main guests and members of the Ghoul Restaurant are seen as they are glorified in expensive and birght colorful dresses and suits and are covered with masks as they watch Kaneki and Taro-chan duke it out. Eventually however, everyone is shocked in horror as Kaneki reveals himself to be an Artificial One-Eyed Ghoul, a legendary and very rare type of ghoul. This forced Tsukiyama to kill Taro-chan and have Kaneki saved so he can taste his blood. Later on during the search for Akihiro Kanou, Kaneki's Group had attacked the Ghoul Restaurant HQ in the 7th Ward and destroyed the restaurant forcing the surviving members to retreat.

After the timeskip in Tokyo Ghoul:re, the Ghoul Restaurant is seen still being alive and active. However, they have lost much of their influence and are resorting to hiding. They are seen hosting an Auction where members of the Ghoul Restaurant are seen selling off countless human prizes to various other ghouls. Once Uta reveals Tooru Mutsuki as a One-Eyed Ghoul however, Juuzou Suzuya, a former scrapper, shows up and begins to attack Uta and soon the CCG forces break down the doors and begin gunning down the Ghoul Restaurant members and guests. At the end of the onslaught, it is unknown what the current status of the organization is as of yet.

The Ghoul Restaurant has a very strict membership system. All of their members appear to be very rich and wealthy upper-class ghouls who most likely use their wealth and power to hide from the CCG and the human world. Guests appear to be their main members and others include guards and scrappers to protect them.

The Ghoul Restaurant is more illusive and secretive compared to that of other ghoul organizations. They appear to host various events and even dinner feasts and restaurants where they hide out at. These events include things like Dismantling Shows where members lure in human guests only to have them get killed by scrappers, human slaves brainwashed into killing the human guests. Once the guests are killed, their body parts are harvested and are eaten as food for the ghouls. 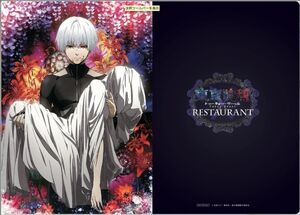