Commander in the Zhao Military

Mark his place in history

Gi Ka is a minor antagonist in the popular historical seinen anime and manga series, Kingdom.

Gi Ka was an adult man who looked about to be in his early 40. He had dark hair with a long goatee and closed narrow eyes that opened occasionally. As a member of the Ten Bows, he a very strong build. He wore full armor of the Zhao Military that unique in design with a quiver of arrows strapped to the back.

Gi Ka was an insightful man, which in part could be attributed to being with Ri Boku the man responsible for planning the defeat and death of Ou Ki, as he took pride in his part to play in taking down the last remaining member of the Six Great Generals of Qin during the Battle of Bayou. 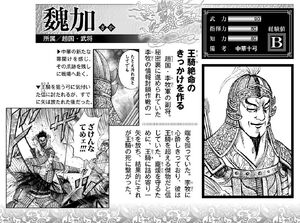