Gianni Bartoli is an Italian magician in the early 20th century who also at some point, was the founder of a dangerous organization, the murderous cult known as Fiamma Nera. His only son, Marco Bartoli soon took over as the leader of Fiamma Nera after his father's death.

Gianni was born in his home of Via Caravelli within the city of Venice in northeastern Italy and his place of work was practically right next door to him at the Opera House. Gianni, although he is a magician, was very interested and fascinated in historical Chinese relics and devious devices related to the Qin Dynasty and, as the first leader of the Fiamma Nera, became obsessed with the Dagger of Xian and its hidden magical powers.

Around the interior of his mansion the devious traps from China were placed to protect particular areas from being accessed. One of Gianni’s relics from China may have influenced his performances as a magician for Gianni can be seen to be apparently levitating a sphere on one of the opera posters.

When Gianni’s son Marco was young, Gianni told him that he possessed the Seraph, an artifact that belonged to the Barkhang Monks, needed in his quest for finding the dagger. Gianni soon set off in his luxury ship, Maria Doria, for his next destination which was presumably Tibet in order to retrieve the Talion, another relict required. But Gianni never reached his destination. The ship was bombed by Barkhang monks who want the dagger to remain undiscovered and safe from falling into the wrong hands. Gianni and everyone aboard died in the sinking of the ship. Soon, Marco inherited as leader of Fiamma Nera to avenge his father's murder and obtain the Dagger of Xian. He would also be the last. 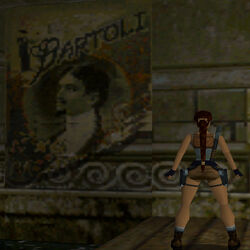 Lara Croft discovers an old poster bearing an image of Italian magician and Fiamma Nera's founder, Gianni Bartoli.
Add a photo to this gallery
Retrieved from "https://villains.fandom.com/wiki/Gianni_Bartoli?oldid=2136381"
Community content is available under CC-BY-SA unless otherwise noted.