Control over his men

The Giant is the secondary antagonist in Hoodwinked Too! Hood vs. Evil.

He was voiced by Brad Garrett, who also portrayed Spike in Mighty Max, Joe Bulo in Fargo, Krang in Teenage Mutant Ninja Turtles: Out of the Shadows, Tony Abado in Seinfeld, Earl Raymond in Recess, Uto in Tarzan II, Torque in Buzz Lightyear of Star Command, Ernst Strepfinger in Ozzy and Drix, Robert Otto in Amphibia, and Gary Munson in Law and Order: Special Victims Unit.

The Giant is a large character with an oval-shaped head, a big nose, and black hair. He wears a blue jacket, a pink buttoned undershirt, tan pants, and a ring on each hand. He is so huge that his thumb his about the size of Red.

After Granny Pickett was kidnapped by an Evil Witch, it turns out that the Giant was one of "Her" minions. He, along with his group of Rhinos, were used to steal all the ingredients needed to make the Super Truffles. Red and Wolf were sent to interrogate the Giant to find out where Granny was. The Giant said nothing, but one of his workers, Jimmy 10-Strings said that Boingo always calls the Giant to get the ingredients. What happened to the Giant after confronting him is unknown. 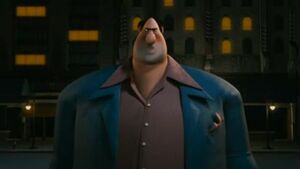