Giant Hamster (real name: Petey) is a hamster who was mutated by Professor Sherman Klump's worst enemy Buddy Love who stolen the good professor's Youth Formula in his greedy schemes and a character in a famous comedic American movie Nutty Professor 2: The Klumps.

The well-mannered Professor Sherman Klump is showing the whole world his discovery, of shrinking. Sherman's participant is a hamster. Once the hamster tried the liquid of shrinking, the hamster instantly became younger and smaller. Everyone was in shock, applauding to Sherman. 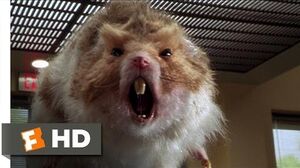 Retrieved from "https://villains.fandom.com/wiki/Giant_Hamster?oldid=4186947"
Community content is available under CC-BY-SA unless otherwise noted.