Member of the Avengers (abandoned)

Devouring as many living individuals he can, especially humans due their taste.

In Dead Days, Giant-Man and the Black Panther are seen running from the zombified Avengers, seeing as Panther's shirt was shredded, and are headed for Hank's lab. Giant-Man had been infected by Wasp, but was still human. However, he knew what would happen beforehand and was luring T'Challa there. Panther eventually noticed Hank's wound but was too late to react as Hank knocked him. Giant-Man is next seen as a zombie at Avengers Mansion, seeking a meal in Jarvis, but finds that the Avengers beat him to it. Giant-Man's next appearance is in battle with Magneto alongside the infected when the resistance is still active, and is knocked down by some cars. Giant-Man reappears when Magneto, Reed of Earth-1610, and the survivors try to escape, saying he wants to eat the girls. He is then blinded by Susan Storm of Earth-1610.

After Magneto destroys the dimensional gate, Hank is one of his devourers after the fight ends. He then sees the Silver Surfer. He is also the one who comes up with the story to tell Iron Man about Magneto.

During the battle with the Surfer, Hank arrived late due to eating Panther's sawed off foot, but doesn't jump in due to the chaos. Once the Surfer is getting munched up, he steals the corpse and shares it with Spider-Man and Iron Man. Giant-Man then devours Galactus alongside Spider-Man, Iron Man, Hulk, Wolverine, and Luke Cage. 40 years later, he returns to Earth. He and the other zombified heroes go to Wakanda and cause trouble. However, Giant-Man turns good again along with all of other heroes aside from the Hulk after they have finally been cured. He eventually gets sent to another dimension. Giant-Man is later killed in the final battle alongside everyone but the Sentry and the Sandman. 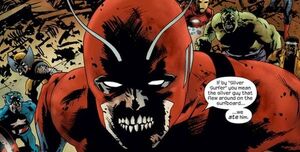 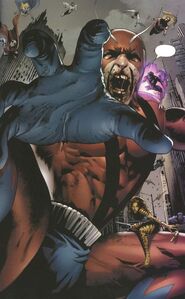 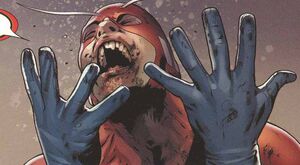 Giant Man arriving at New Wakanda.
Add a photo to this gallery

Retrieved from "https://villains.fandom.com/wiki/Giant_Man_(Marvel_Zombies)?oldid=3285091"
Community content is available under CC-BY-SA unless otherwise noted.