The Giant Praying Mantis is the secondary antagonist of Sony Pictures Animation's thirteenth feature film Goosebumps, which is based on the book series of the same name. It is one of the monsters to be released from one of R.L. Stine's manuscripts by Slappy, and wreak havoc on the town. It was also from the book A Shocker on Shock Street.

Its vocal sound effects were provided by Jesse Johnstone in the 2015 film.

It encounters R.L. Stine, Zach Cooper, Hannah Stine, and Champ. It chases the car that they are in and destroys half the town doing it.

It manages to follow them to a grocery store, but they already escaped, so it destroys the car. The Giant Mantis shows up at the school and attacks a student close to the window.

Zach managed to finish the book just as the monsters reached them, and promptly opened it, causing a vortex to suck the Mantis and all the monsters in the book. The Mantis was the second to last monster to be sucked in behind Slappy. 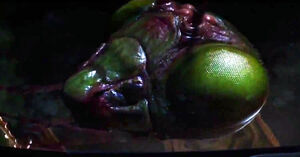 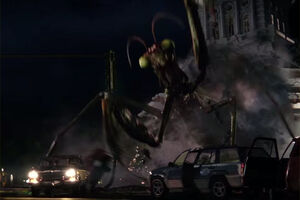