The Giant Robotic Alien is a minor background villain from Teen Titans Go!. As his name would suggest, he is a collossal-sized alien creature with robotic features and attributes. He is very little aside from just being a generic reckless monster that destroys the city and his only purpose in the show is to be a plot device.

The Giant Robotic Alien first appeared in "Colors of Raven", where he wreaked havoc in Jump City turning buildings to rubble and filling the skies with the smog and ember of his destruction. The Teen Titans showed up to stop him but at the time, Raven had been cloned into five different versions of herself, all representing a different emotion. When Robin called the Titans to attack, none of the Raven Emoticlones were competent enough to stop the Giant Robotic Alien. Red raven just beat Cyborg up, Purple Raven kissed Beast Boy, Pink Raven acted silly and crazy, Gray Raven hid and cowered in fear and Orange Raven was too lazy to fight the alien so she just went to sleep. The Teen Titans did not defeat the Giant Robotic Alien.

Later in that same episode, an establishing shot featured the silhouette of the Giant Robotic Island way off in the background, still destroying the city, implying that the robot was still undefeated.

In "Nature", The Giant Robotic Alien was destroying Jump City. The Titans had to follow a strategy to stop the alien. Beast Boy was instructed to attack the Alien from the middle, in the form of a pterodactyl, while Robin and Cyborg attacked the right and Starfire and Raven attacks the left. However, Beast Boy was oddly unable to transform into a pterodactyl. Beast Boy later tried to turn into a cheetah, but he still failed to transform. Finally, Beast Boy tried to turn into a rhinoceros to knock the alien off balance, but he once again failed to transform, leaving him headbutting the alien in the leg to no avail. The Giant Robot Alien kicked Beast Boy into a nearby telephone pole, breaking it in half. The telephone pole fell down and the wires electrocuted the alien, zapping it to death and defeating him. Beast Boy celebrated the Giant Robot Alien's defeat, despite it happening completely on accident and most of the alien's harm being inadvertently self-inflicted.

In "Some of Their Parts", Robin and the Emoticlones of the other Titans defeated tons of villains, via montage. At the end of the montage, the Titans stood upon a pile of defeated enemies. Included in the pile was the Giant Robot Alien. 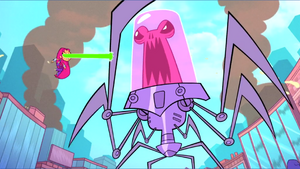 The Teen Titans fighting against the Giant Robot Alien.

The Giant Robotic Alien's cameo in "The Titans Show".