Guard the Sword Unbreakable from all trespassers (failed)

The Giant Skeleton is a minor antagonist from the Laika stop motion film: "Kubo and the Two Strings". They are a giant skeleton that's in charge of guarding the "Sword Unbreakable".

After making it to the Hall of Bones, bones lying around the room floated up into the air. After they vanished from view, the Giant Skeleton flashed his eyes in the darkness at the protagonist, now being fully formed. He looked down at them and growled. Kubo discovered that the sword was in its head, and so Beetle tried shooting arrows at it. These had no effect, only angering the skeleton and prompting him to grab Monkey. Beetle continued to shoot arrows at his face which caused the beast to turn its head away. He began moving his head closer to Beetle, which also put his hand (with monkey in it) at the top of his head. Monkey grabbed one of the swords and tried to slice her way out of his grasp, but the swords she grabbed only shattered upon impact. The Skeleton proceeded to try and stomp on Kubo and Beetle, but he missed. After missing he turned his attention back towards Monkey and began pulling her closer to his face. Kubo made a distraction by playing a tune that made his paper into paper-mashie birds, which flew in the monsters face. The monster, unable to see, began walking forward towards Beetle and Kubo. Kubo tripped, Beetle grabbed him and it was discovered that Beetle could in fact fly. They flew to the top of the skeletons head and began searching for the correct sword. Eventually, the skeleton shook its head and sent Kubo flying, but he was saved by Beetle. Unfortunately; this caused Beetle to get caught in his grasp. After returning back to the top of the head Kubo found the correct sword and pulled it out, which caused the skeleton to die and fall apart.

The skeleton appears to be of massive size, have orange bones, jagged teeth, have swords in the top of its head, glowing yellow eyes, and old iron samurai attire.

The skeleton having arrows shot at him for the second time. 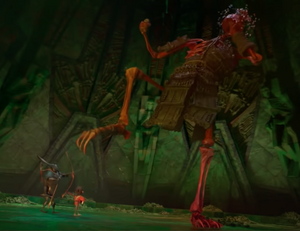 The skeleton being swarmed by birds.

The skeleton after having grabbed Monkey. 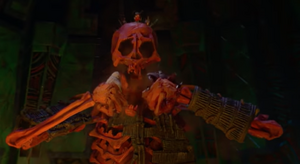 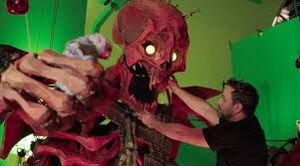 The skeleton being animated.
Add a photo to this gallery

Retrieved from "https://villains.fandom.com/wiki/Giant_Skeleton_(Kubo_and_the_Two_Strings)?oldid=4150135"
Community content is available under CC-BY-SA unless otherwise noted.