Protect its home from being destroyed. (succeeded)

Giant Tentacruel (Dokukurage in the Japanese version) is a former antagonist in the Pokémon anime, appearing in the episode "Tentacool & Tentacruel".

Ash, Misty and Brock missed the boat that will get them back to the mainland. Misty notices a hurt Horsea floating in the water while she, Ash, and Brock are waiting for another boat to the mainland. The Horsea tries to warn them about something that will happen by drawing a picture with ink in the water, but Misty does not understand and tries to capture the Horsea. Before she can, an explosion happens and a boat is destroyed. Misty sends out Staryu, Starmie, and Goldeen to rescue the sailors that were flung into the ocean. Brock gets a nearby boat and helps rescue them. The sailors mumble about what made their ship blow up and must report it to their boss. Unbeknownst to anyone, strange shadows lurk beneath the surface.

Later, Ash and his friends meet Nastina, who looks just like Brutella from the previous episode. She thanks them for saving her workers but when Ash says they have to leave, she tells them they can't leave without staying at her new resort. She tells them about her plan to build a hotel on the ocean (it is literally sitting on a coral reef) for wealthy tourists. When finished it will have an undersea view surrounded by beautiful coral reefs, but only if some Tentacool stop interfering. She states that because of the Tentacool nothing can get done and wonders why such despicable creatures exist. Misty becomes offended when Nastina says that they are disgusting, no one can eat them and they're hurting her profits. So she offers the three to exterminate the Tentacool and will pay them well, offering a full 7 course meal, $1,000,000 and free passes to the hotel. Ash was excited however Nastina tells them that they have to exterminate the Tentacool first, then she'll pay them. Brock and Ash want the money, but Misty yells at her turning down her offer. Nastina is not pleased.

Some time later, Misty is still angry about how Nastina bad-mouthed the Tentacool and says that they are cute. Ash checks the Pokédex and, after looking at it, says it's ugly. Misty states that if the Tentacool are bothering humans there has to be a reason for it. Ash asks if she thinks so and Misty says of course. She also says that Tentacool are wonderful and the red spot on their forehead is called the "Ruby of the Sea". Ash and Brock wonder who calls it that and Misty says she does since it's her name for it. Ash notices that when Misty talks about water Pokémon she has a different personality. She explains that water Pokémon have such great charm and depth, like the Horsea they saw as she complimented on the art it drew, which Ash makes fun of.

Soon they find that Horsea is all better thanks to the potion Brock administered. Horsea then tries to warn Misty again. Ash wonders if the ink painting in the water looked like a Tentacool and Brock summarize that it may have something to do with the Tentacool. Misty asks Horsea if it's true and Horsea confirms it. Just then, Nastina makes an announcement to the public and offers a reward to anyone that gets rid of the Tentacool, which offends Misty. When she says it's ridiculous for her to expect the people to get rid of Tentacool for money, Ash says it's not ridiculous for the townspeople and he and friends are almost run over by the residents as they run to the beach.

Nastina appears in a tank and asks who's ready to destroy the Tentacool. The tank is struck by a rose and who should appear but Team Rocket. They offer to help Nastina and she says if they do a good job they'll have the reward. As Team Rocket heads out to the sea, Misty is worried because they are disrespecting the ocean. Team Rocket then reveals that they will get rid of the Tentacool by putting their Super Secret Stun Sauce on the Pokémon and then selling them at a fish market. But their fantasy is interrupted when their fishing boat is stopped by angry Tentacool. Considering the numbers, They don't have enough sauce to stun them all. One Tentacool fires a red beam at the boat and the entire barrel lands on it, but instead of being stunned, it evolves into a Tentacruel 100 times larger than normal size and it starts destroying the city. The three get caught by one of Tentacruel's tentacles. Nastina then fires at the Tentacruel but because of their body's elasticity the shells bounce off. Jessie and James are thrown to the amusement park ferris wheel. Everyone retreats to higher ground and the Tentacool walk on land smothering everything in their way. Ash and the others why their doing this but soon notice Meowth is still in the Tentacruel's tentacle. A Tentacool latches onto Meowth and uses him to talk to the people of the city. It explains that they are destroying the city just like the humans tried to destroy their home. Ash and Brock realize the reason why the Tentacool and Tentacruel are destroying the city: because their homes must be where Nastina was trying to build the hotel, on the coral reef. Misty then realized that this was exactly what Horsea was trying to tell them. The Horsea from earlier begs them to stop but it is attacked by the giant Tentacruel for calling it spineless. Ash, Misty, and Brock send out their Pokémon to fight back.

The Tentacruel doesn't understand why Pokémon would want to be friends with humans. All seems lost until Pikachu tries to reason with it and Misty stops the Tentacruel in its tracks. She has gotten to the roof of a building and begs it to stop. She says that humans have understood that what they did was wrong and that the hotel wouldn't be build on the coral reef. The Tentacruel (after taking a moment to realize that their wanton destruction of the city is making them no better than the humans who tried to destroy their homes) agrees to call off the attack, but it delivers a warning: if their homes are attacked again, the city will destroyed, and next time, they won't stop. It then tosses Meowth and he lands on top of a destroyed ferris wheel. Tentacruel and the Tentacool head back to the ocean but Nastina attempts to destroy the Tentacruel. Horsea squirts ink on her face and Misty berates her because she's upsetting the balance of nature. The Tentacruel picks up and throws her because, unlike her, it cares for the denizens of the ocean and the land. Elsewhere Brutella finishes reconstructing her restaurant but Nastina falls and destroys it again.

Ash, Misty, and Brock finally get on a boat to the mainland. The Horsea decides to join Misty, so she captures it. Even though the Tentacool and Tentacruel almost destroyed the city, Misty still loves them. She does Ash's victory pose, which bugs him. Team Rocket are stuck in a bucket tied to the boat and they plot revenge. 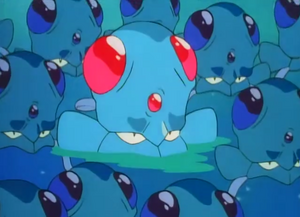 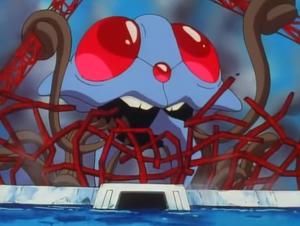 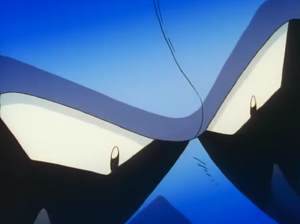 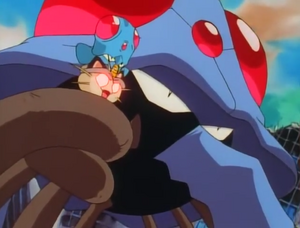 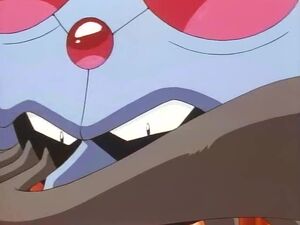 "You will learn your lesson, Nastina, once and for all!"