Unknown. (too short an encounter to determine)

Enigmatic Aliens
The Giants of Voronezh are an infamous group of alien cryptids reported to have attacked an entire crowd of spectators at a park in Voronezh, Russia in September 27, 1989.

Due to the sensational reports and a large degree of dubious "investigation" at the time the Giants of Vornezh incident has become a hotly debated subject which some arguing it was a hoax, mass-hysteria or exaggeration.

The exact details of the dramatic Voronezh case are hopelessly muddled and may have been heavily distorted by the press, but in the popular version, a group of young children and several adults witnessed three enormous humanoids emerge from a round, red aircraft at a public park. The creatures appeared to be nearly ten feet tall, with metallic jumpsuits and small, dome-like heads, featureless except for their three menacing, luminous eyes. When a boy cried out in terror, the beings paralyzed him simply by glaring at him, then vanished into thin air for around five minutes. When they returned, they fired a beam at another boy who appeared to disintegrate. After a stroll around the park, the giants flew away in their craft and their zapped victim instantly rematerialized. 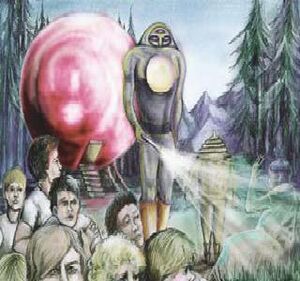 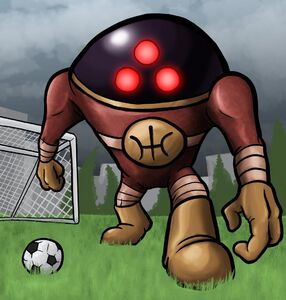 A Giant of Voronezh as seen walking down a park's soccer field.
Add a photo to this gallery

Retrieved from "https://villains.fandom.com/wiki/Giants_of_Voronezh?oldid=3634046"
Community content is available under CC-BY-SA unless otherwise noted.