Martin Blank, also known as the Gibbon, is a supervillain who is a rival of Spider-Man and a member of the Spider-Man Revenge Squad.

Seemingly born a Mutant with an ape-like build and agility, The Gibbon later joined a circus where he excelled as an acrobat. His powers were later enhanced by a potion given to him by Kraven the Hunter to "Unleash the Beast within". Martin Blank began his career as a friend of Spider-Man's. He even wanted to be his partner, but Spider-Man laughed at him. Sick of being seen as a freak, Martin could no longer endure further ridicule and lashed out. He then caught the eye of Kraven the Hunter who enhanced the Gibbon's powers with an herb broth, also giving him a great animal rage. After being defeated by Spider-Man, Martin dropped out of sight.

Later, Gibbon sought revenge on Spider-Man, trying to prove himself as good as his foe. He was caught in the middle of a fight with Spider-Man and the Beetle. Eventually Gibbon helped Spider-Man by punching out the Beetle. Gibbon later joined up with other "has-beens" the Kangaroo, Grizzly and The Spot to form the Spider-Man Revenge Squad (also known as the Legion Of Losers).

This team fell apart when Spider-Man carted the Spot and the Kangaroo to jail for bank robbery. He and the Grizzly later attempted to go hero, helping Spider-Man thwart a bank robbery by the White Rabbit and eventually getting an action figure deal.

The Gibbon retained his powers after the Decimation.

During the Civil War, Stilt-Man was killed by the Punisher. Gibbon attended his funeral along with many others criminals, and they were all drugged by the Punisher, using the guise of a bartender, who then made the bar explode.

He was listed as a potential recruit for the Initiative.

De-figured and looking almost as a normal human, Gibbon married the now-blind widow of Stilt-Man, Princess Python, and participated on a regular basis at the Guild of Survivors meetings, for those who escaped from the bombed-bar. He tried to take revenge on Castle, but ultimately gave up.

He volunteered to undergo scientific experimentation at State University. He met Doctor Fiona Fitzhugh, an independent research whiz who put the Gibbon through a battery of tests in order to develop a better understanding of his mutation. An accident in the laboratory opened up a dimensional rift, and Fitzhugh and he were transported to a world dominated by apes. This world was very similar to Earth and included simian counterparts to known heroes such as the Avengers and the Fantastic Four. 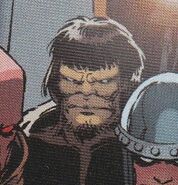 Add a photo to this gallery
Retrieved from "https://villains.fandom.com/wiki/Gibbon?oldid=3536848"
Community content is available under CC-BY-SA unless otherwise noted.