Gideon Drew is the main antagonist of the 1958 Universal B-Movie, The Thing That Couldn't Die.

He was portrayed by the late Robin Hughes.

400 years before the events of the film, he was taken to the United States by Sir Francis Drake. A devil worshipper and sorcerer, Gideon Drew was sentenced by Francis to living death by having his head removed from his body. Though decapitated, Gideon still lived and was sealed in a chest and buried in the earth. The body was buried somewhere nearby.

400 years later, a ranch is built on the area. Jessica Burns, the niece of the ranch owner has psychic powers and uses her abilities to douse for water. Standing where Gideon was buried, Jessica shows immense fear and warns that there was something evil buried there. The farmhands dismiss her claims and dig to find the chest containing Gideon's head. Believing there to be gold, the farmhands jokingly claimed Jessica fears was that gold is the root of all evil, making Jessica leave angrily. Gordon, her boyfriend convinces everyone not to open the chest as the chest itself could be worth money due to it being a historical treasure. A silver talisman is also discovered which is restored by Gordon who gives it to Jessica. Flavia, the ranch owner, locks the chest in the sewing room and takes the key.

Though told that the chest was worth money, Boyd, Flavia's greedy ranch foreman, steals the key to the sewing room and a farmhand named Mike break the ancient lock with his strong hands. Opening the chest awakens Gideon's head. Telepathically controlling Mike, he makes Mike murder Boyd and has Mike drag the body away. The police soon arrive and kill Mike though Gideon is able to control several more people. Jessica soon looks around and has a vision of Gideon's origin and learns that if Gideon is reunited with his body, his power will be complete. She also realizes that the talisman is the only thing that repels Gideon's power.

Despite this knowledge, Jessica gives the talisman to Gordy who planned to make a cast of it and comes under the control of Gideon. Everyone soon finds the coffin containing the body and Jessica puts Gideon's head back on, restoring his power. One of the farmhands uses a gun against Gideon to no avail and Gideon announces that he is hungry for blood but shows disappointment over the ranchers, saying that ones blood was dried up and another's was turned to water.

However, Gordon shows up with the talisman scaring Gideon who falls into the coffin. Throwing the talisman in, they trap Gideon in with no way to escape the talisman's power. Opening up the coffin reveals a skeleton, revealing that Gideon after 400 years, was finally dead and that, "Satan has finally taken him!". 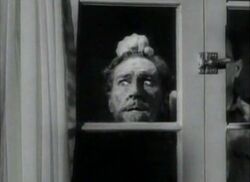 Gideon’s head being held by one of the other characters of the film.
Add a photo to this gallery
Retrieved from "https://villains.fandom.com/wiki/Gideon_Drew?oldid=3465301"
Community content is available under CC-BY-SA unless otherwise noted.