Founder and leader of the League of Evil Exes

Collecting his ex-girlfriends and chryogenically freezing them.

Gain Ramona's subspace powers and use them to control every mind in the world.


Control Ramona's love life.
Cryogenically freeze Ramona for his collection of ex’s to be dated later
Destroy Scott Pilgrim and have Ramona as his muse. (all failed).

Gideon Gordon Graves is the main antagonist of the Scott Pilgrim franchise.

While being the seventh and last ex-boyfriend of delivery girl "Ramona Flowers", Gideon is an evil, knowledgeable mastermind with a plan of conquering the world, as well as being the leader and founder of the League of Evil Exes, created after he met Ramona's other exes on the Internet, and the archenemy of Scott Pilgrim, the series main protagonist and Ramona's current boyfriend.

In the books, Gideon only reveals himself in the end of Volume 3, but ever since Volumes 1 and 2, Gideon is hinted as spying on Scott and Ramona from Scott's subspace, manipulating his memories and associating his own image with Simon Lee, Kim Pine's ex-boyfriend and Scott's first enemy. He is then seen in Volume 3 during the battle with Todd Ingram, when the vegan has a flashback showing Gideon telling him to "use his vegan powers or whatever", and again after Todd is defeated, leaving the show completely not impressed with Scott's abilities. At the end of Volume 5, Gideon finally calls Scott on the phone, taunting and asking him when a convenient time would be for him to die.

In Volume 6, after defeating Nega Scott, Scott goes to the Chaos Theatre to stop Gideon once and for all. However, Gideon effectively steals the Power of Love sword that Scott had and impales him with it, killing him. However, Scott uses the 1-up he gained after defeating Todd to return to life and face Gideon again. Gideon reveals that he is keeping six of his previous ex-girlfriends on cryo-capsules on the ceiling and keeping them under some sort of mind control, enabling him to date them again anytime, and he wishes to include Ramona on the final capsule. To make matters worst, Gideon uses an ability called "The Glow" to make Scott and Ramona argue with each other, causing her to attempt to leave through Subspace, but Gideon impales her with his sword and calls Scott into the portal, as he follows through another gateway in Ramona's purse. There, he defeats Gideon's god form as Ramona takes the Power of Love sword from him, healing her wounds.

Once they return, Scott realizes how similar he is to Gideon and gains the Power of Understanding sword, as he and Ramona face-off against Gideon in a final battle, after he draws his pixel katana and engages both of them. After taunting them with the truth, Ramona disarms him and leaves him at their mercy, but Gideon states they can never truly destroy him, as both Scott and Ramona are their own worst enemies. Both agree that Gideon is much worse and finish him with a cross slash, making him burst into $7,777,777, which painfully rains down upon the crowd, putting an end to the League once and for all.

In the game, Gideon is the final boss of the appropriately named "World 7" (like the movie's "Level 7"), appearing in three forms. The first form, Super Gideon Graves, is a more buff and brutish version of him, relying on brute strength to attack Scott. After being defeated by the player character, he will send the player into his Subspace, where the player will find him at the end. He then turns into Gigadeon Graves, a giant form covered in the other exes' faces and with visible heart and veins. After defeating Gigadeon Graves, he is seen at the end of a hallway, with Gideon at his final form.

His final form is a robot version of his normal self, and when defeated, it is revealed that it was all a simulation, with Gideon himself appearing from behind it, begging for mercy on his knees. One final hit defeats Gideon for good, and he explodes into coins.

Gideon is arrogant and ruthless, but calm and outspoken, almost looking like someone worth trusting. His methods are discreet, but still highly efficient, much different from the rest of the League. While he does act friendly, he hides a cold and calculating behavior inside, willing to do everything to defeat Scott.

He has a huge variety of powers, especially psychic ones. One of them, "emotional warfare", can trap the enemy inside his own mind, forcing him into facing his issues and problems. His other powers involve the usual agility and levitation, as well as excellent sword handling, and in the games, shape-shifting. Gideon's weapon of choice is a katana made entirely out of pixels, which he can easily handle in battle by literally fighting with one hand behind his back. Gideon is seen fighting like that in the comics, and in the movie.

According to Bryan Lee O'Malley in all adaptions like all of the other evil exes, following his defeat at the hands of Scott and Ramona, he respawns back at his home, having learned his lesson. He also finally begins to leave them alone. 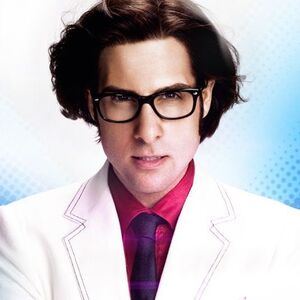 Gideon in the movie adaptation 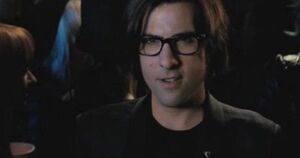 Gideon during the fight with the Katayanagis. 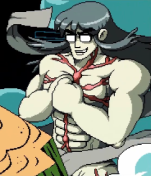