High durability
Use of the telephone pole

The Giga-Gargantuar is one of the secondary antagonists of the Plants vs. Zombies franchise. It is an upgraded version of Gargantuar, who takes parts in fighting plants.

The Giga-Gargantuar only be encountered in Last Stand and Survival - Endless levels. His abilities are identical to the Gargantuar, but he has more health than his predecessor. The players need to use four of their explosive plants to take him down. Otherwise, he will eat their brains.

The Giga-Gargantuar returns in the Garden Warfare series as one of the major bosses in Garden Ops mode. His attacks are almost identical to the Gargantuar, but unlike him, he can fire powerful electric shocks and deploy more Imps at plants. 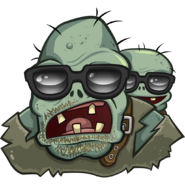 His icon
Add a photo to this gallery

Retrieved from "https://villains.fandom.com/wiki/Giga-Gargantuar?oldid=4142668"
Community content is available under CC-BY-SA unless otherwise noted.