Giga Lakitu (also known as King Lakitu in the original Japanese release or Lakuto) is a boss in the video game Super Mario Galaxy 2 that is encountered in the Yoshi Star Galaxy.

Giga Lakitu is, as his name suggests, a giant Lakitu, and is encountered in the second mission of the Yoshi Star Galaxy, "Spiny Control". He attacks by throwing Spiny Eggs, like a normal Lakitu. In order to damage him, Mario must use Yoshi to spit the Spinies back at him. Mario must do this three times to defeat him. He also has an attack where he will fly across the battlefield and shoot lightning at Mario from his cloud, which will defeat Yoshi instantly if it hits. When he is down to his second and third hit points, he will throw two and four Spiny Eggs at Mario at a time respectively. 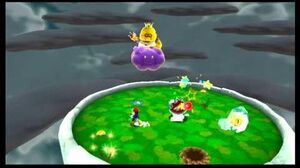 Retrieved from "https://villains.fandom.com/wiki/Giga_Lakitu?oldid=4339986"
Community content is available under CC-BY-SA unless otherwise noted.