Servant of the Nebula M aliens and Xiliens

Take over the Earth for its masters.

In the Showa series, he was very strong and was a difficult and brutal opponent as he can make the heroic Godzilla bleed rapidly, while in Godzilla: Final Wars, Godzilla defeated him in less than a minute without any allies, but returns later in the film and is killed by Mothra. Although not as famous as King Ghidorah, Godzilla, Rodan, Mechagodzilla or Mothra in the United States, he still remains popular to American fans who know him. Gigan has appeared in three Godzilla films (twice in the 1970's and returned in 2004).

Gigan and King Ghidorah were summoned to Earth by the Nebula M Spacehunters (or Nebulans as they are also called), so as to aid in the conquest of Earth, starting with Tokyo. The pair were challenged by Godzilla and Anguirus and were defeated after a long and hard battle.

The Nebulans later sent Gigan to help Megalon, a monster controlled by a race known as the Seatopians, in his fight against Godzilla and Jet Jaguar. But yet again, Gigan met defeat and left his ally to flee back into space.

In a crossover between the TV series, Zone Fighter, and the Godzilla movies, Gigan was commanded to help the Garoga, another group of aliens, fight Godzilla and Zone Fighter. But, after receiving a severe pummeling from the King of the Monsters, Gigan fought and met his end at the hands of Zone Fighter.

Gigan appears in the 1997-1998 television series, Godzilla Island as the honorable main antagonist of Story 5. He also briefly appeared as a hero in the Story 12 episodes "Gigan Appears" and "Until That Day", where he helps Godzilla fight Destoroyah and Megalon. Gigan made one more appearance in Story 16 as an anti-hero.

In the Millennium era, Gigan was a cyborg that had been defeated over 10,000 years ago by the guardian kaiju, Mothra. The organic/cybernetic monster was revived by the Xiliens' commander who activated him since Xiliens can control kaiju such as Gigan that have the 5th blood type - M Base. Gigan then destroyed the Earth Defense Force Headquarters building with his eye-lasers and wreaked havoc on Tokyo killing several people in his destruction. The Gotengo crew, the last resistance for humanity's future, rushed to Antarctica to free Godzilla so he can fight all monsters controlled by the Xiliens.

Gigan was sent to the South Pole to destroy the Gotengo, only to find himself confronting the newly reawakened Godzilla. In the ensuing fight, Gigan's head was blasted off, but the Xiliens repaired him so as to aid their other monster, Monster X. Gigan battled Godzilla alongside Monster X until his old enemy Mothra showed up. In the fight, the cybernetic monster set the guardian kaiju ablaze with his eyebeam and seemed to kill her. However, two of his razor discs, which he had fired during the battle, came back and cut his head off. Mothra then finished him by slamming her fiery body onto him, generating an enormous explosion.

Gigan appears in the game Godzilla: Unleashed as a playable monster, who has sided with the Aliens faction. The Showa version is exclusive to the PS2 version of the game and the Millennium version is unique to the Wii version.

Gigan has high destructive capabilities, being a giant monster, and possess a pair of hooked claws/blades and a saw on his chests, which makes him even more deadly. Gigan can also fly at Mach 3 and fire energy beams from its visor and after being upgraded. 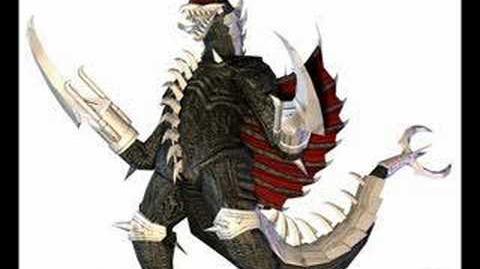