"Secret weapon" of the League of Villains

Isolating in the woods and listening to the news.

Assist the League of Villains in their plans.

Gigantomachia (in Japanese: ギガントマキア, Gigantomakia) is a major antagonist from the manga/anime series My Hero Academia. He is a loyal servant of All For One and a member of the League of Villains.

Prior to the rise of the league, Gigantomachia remained isolated in the woods. After listening to the news about Stain's capture on his radio, Gigantomachia began to emerge and prepare for the inevitable. He eventually discovered the League of Villains under Tomura Shigaraki's leadership.

He is voiced by Yasuhiro Mamiya in the Japanese version and Cris George in the English dubbed version.

Gigantomachia appears as a behemoth-like being. His entire body is muscular and shaped in a hard, sharp form. He has red eyes that at first appear to be completely blank, but later revealed to have very small pupils. He also black spiked hair and sharp teeth and is always seen carrying his radio around his neck.

In the past, he wore a large cloak over him, which shrouded his body in shadows.

Gigantomachia appears to speak in a mysterious and religious manner. He refers All For One as his "lord" and "master", saying that everything he does is for him. He is mainly shown to be listening to his radio, which either broadcasts a news channel or is simply used to communicate with All For One and Daruma Ujiko.

He is also shown to be rather hot-tempered and impatient, as he slowly began to cause havoc when two girls wouldn't give him the directions to the Pro Hero, Springer's agency. In addition to this, he can also be very emotional, as he broke down into tears when he realized how weak the League of Villains had gotten under Tomura's command while lamenting to All For One that he couldn't accept them. However, he can easily be subdued through the voice of All For One, to the point where he will calm down immediately and purr, showing a very obedient and loyal side to him. Upon witnessing Tomura's success against Re-Destro, however, Gigantomachia has come to accept Tomura as the successor of All For One.

In the past, Gigantomachia was seen in the city, asking for directions to the Pro Hero, Springer, to a couple of school girls. At the same time, his frightening appearance was terrorizing nearby citizens. When he received no answer from either of them, he began to slowly crush a building above them, until he was stopped by Mina Ashido, who gave him false directions. Gigantomachia then proceeded to leave the area.

Gigantomachia made a brief appearance in the Vs. Hero Killer Arc where he is seen in the woods, listening to the news about the Hero Killer: Stain. Eventually, Gigantomachia began preparations for the League of Villains.

Kurogiri was out in the woods searching for Gigantomachia, until he was ambushed by Gran Torino and the Police Force. Eventually, Gigantomachia emerges from the woods, where he confronts the group of heroes. It is revealed here that, prior to his arrest, All For One had preparations for both Tomura Shigaraki and Gigantomachia, where if anything were to happen to him, Kurogiri can rely on Gigantomachia.

After Kurogiri was arrested, Gigantomachia went on his own to find the League of Villains. He eventually discovered their hideout and met with Tomura and the rest of his companions. To see if he truly is a worthy successor of All For One, he engages him and the other villains in a battle.

When he finds himself beating them with no difficulty, Gigantomachia breaks down in tears, realizing how weak they are and demanded how All For One could put his hope into Tomura. Ujiko then speaks through the radio and plays a recording of All For One, which manages to calm down Gigantomachia. In the meantime, the other villains were sent to Ujiko's hideout while Gigantomachia was left alone for a bit.

The villains eventually returned back to their hideout after working things out with Ujiko. Tomura then reintroduces himself to Gigantomachia as the "future king", only for Gigantomachia to respond to him, saying a king is someone who respects others and proves he is strong.

A month has passed and Gigantomachia still refuses to accept Tomura as All For One's successor as he continues to attack him and the rest of the villains without warning. Gigantomachia eventually went to sleep for a few hours, while the other villains head out to Deika City. Eventually, as time passed, Gigantomachia got up from his slumber and immediately began to head out into the city after sensing the location of the League of Villains.

He eventually made his way to Deika City, where he proceeded to tear through the Meta Liberation Army to search for Tomura. Gigantomachia continues to cause havoc, eventually coming in conflict with Geten, who was battling Dabi. Geten attempted to restrain him with his ice, but Gigantomachia manages to break free and easily swat him away after detecting Tomura's scent. Gigantomachia eventually reaches the battle between Tomura and Rikiya, but upon reaching the area, he stops after he witnesses Tomura embracing his villainy and achieving his true power by destroying the city.

After Rikiya's defeat and giving up his army to Tomura, Gigantomachia mentally compared the victorious Tomura to All For One and shed a tear of joy, as he finally recognized Tomura as All For One's successor. When the factions of League of Villains fused with the Meta Liberation Army, Gigantomachia is in the crowd witnessing the formation of the Paranormal Liberation Front.

Gigantomachia is said to be one of the few villains that possess multiple Quirks, despite not being a Nomu, making him an immensely powerful villain and the perfect bodyguard for All For One. While only a few of these Quirks have been revealed so far, his abilities are as follows;

Overall, Gigantomachia is a terrifyingly powerful villain and arguably one of the most powerful in the series. With his brute strength, he was able to fight and easily defeat the combined forces of the League of Villains, with the League even facing him for a month straight but to no further avail. He was also able to face the Pro Hero, Mt. Lady head on and managed to toss the equally gigantic heroine out of his way.

Despite being a tremendous force of power and strength, Gigantomachia appears to lack intelligence for the most part and seems unable of thinking for himself. He requires orders from either one of his masters to perform tasks and only seems capable of coming to his master's aid without the need of a command. 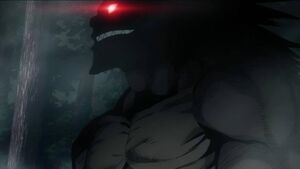 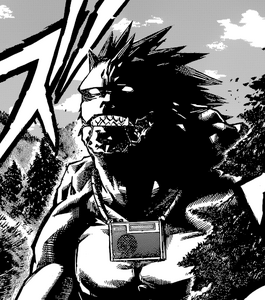 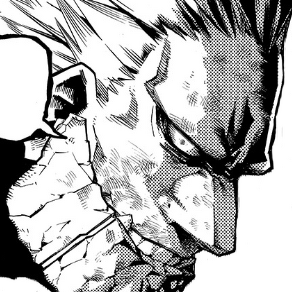 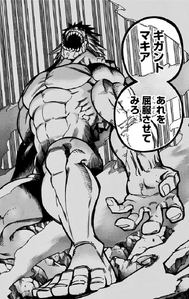 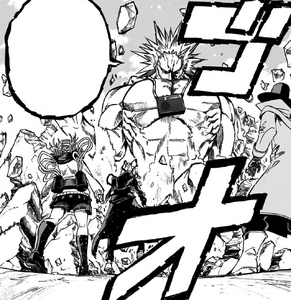 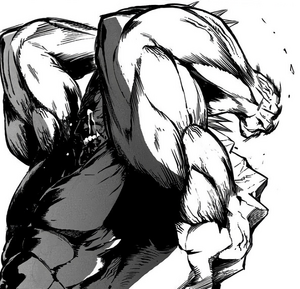 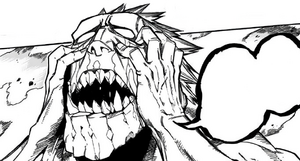 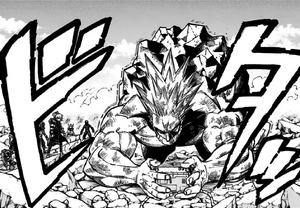 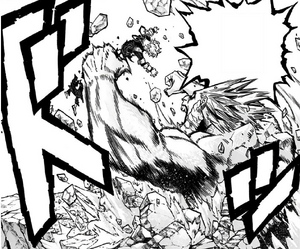 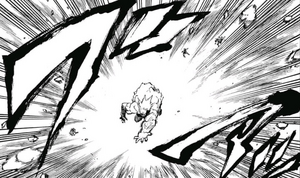 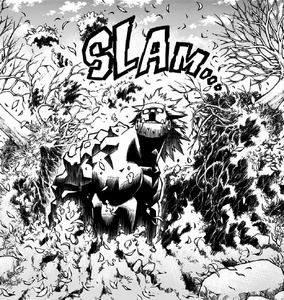 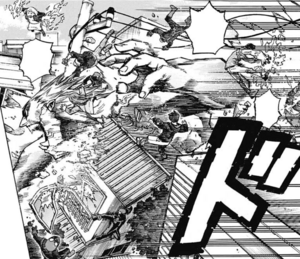