Giger is a giant robot that was used by A.I.M.S. however one of them was hacked by a MetsubouJinrai.NET operative named Jin, serving as one of two antagonists (the other was the Dodo Magia) in episode 8 and the main antagonist in episode 9 of 2019 TV series called Kamen Rider Zero-One.

The Giger was hacked by Jin during MetsubouJinrai.NET's assault on A.I.M.S.'s base. MetsubouJinrai.NET later hacked it remotely and began using it to attack hospitals and convert their HumaGear workers into Trilobite Magia.

Now this here Giger unit was walking towards the next hospital so it can hack the HumaGears into more Trilobite Magia, but it was stopped by Kamen Rider Zero-One. However things doesn't look to well for Zero-One due to the Giger Unit massive size and he was instantly kicked towards the hospital building knocking him out of his transformation. Thankfully Izu arrived just in time to give Aruto the Progrise Key called Breaking Mammoth to even the odds, so after the battle Giger Unit was then crushed by the Breaking Mammoth's finisher called Breaking Impact.

Multiple Gigers were later hacked by Jin and caused to go on a rampage during the massive crusade he led with an army of Trilobite Magia against the city following A.I.M.S.'s raid on MetsubouJinrai.NET's base in Daybreak Town. One was used by Jin to overpower Kamen Riders Vulcan and Valkyrie, but was destroyed by Zero-One Breaking Mammoth. 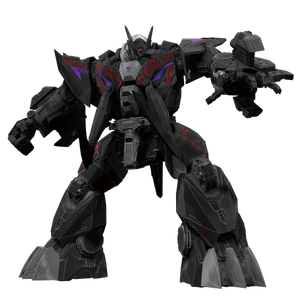 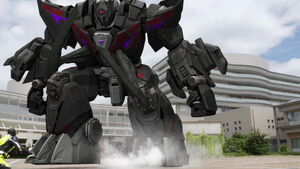