Introduce "Artwork" to the world.

Gilbert (also known as Gigi the Great) is a recurring antagonist from Powerpuff Girls Z, the anime version of The Powerpuff Girls. He is a crazy hair stylist, who is obsessed with giving his clients a ridiculous new hairstyle. He is usually accompanied by his teddy bear, Squiggles. Gigi became even worse than normal when Squiggles got struck by Black Z Rays and hypnotized him. He first appeared in the eponymous episode.

In the episode "Gigi the Great", Gilbert made his first appearance, working in a hair salon. He kept giving people horrible hairstyles that made them look like they had traffic cones on their heads. Nobody appreciated his artwork and he was getting into a lot of trouble with his co-workers because of it. After his artwork was insulted enough, Gilbert ran into the bathroom to cry. While he was in there, he talked to his companion cube, Squiggles the talking string-pull teddy bear for reassurance. Just then, Squiggles got struck by Black Z Rays and turned into an evil hypnotic bear, who told Gigi that he needed to continue doing what he was doing until people started to appreciate his work. As he did, Gilbert started to get affected by the Z Rays as well, turning him into an enhanced version of himself, who went by the name "Gigi the Great".

Gigi the Great went back out on the floor again and gave yet another customer one of his ridiculous haircuts, once again. This time, however, he used his hypnotic powers to make his customer love his work and praise him for it. His co-workers started to get mad at him but he hypnotized them too, causing them to praise him as their best worker.

Before long, Gigi's traffic cone haircut became the new trend in New Townsville. The Powerpuff Girls took note of this when they saw that even Princess Morbucks had this new hairdo. The girls were both confused and disturbed by Princess' new look but they thought little of it.

Meanwhile, Professor Utonium and Ken picked up readings of Black Z Rays landing in New Townsville. They tracked down the Z Rays to Gigi's hair salon, where they witnessed Gigi the Great giving a myriad of customers the infamous new haircut. As confusing and nonsensical as this was, Professor Utonium and Ken saw nothing particularly wrong with this and left the scene, still not knowing what the effects of the Z Rays were. They could not sit and think about this for long, as they quickly received a distress signal from Poochie, saying that Mojo Jojo was on the loose, destroying New Townsville.

Gilbert saw The Powerpuff Girls defeating Mojo Jojo live on the news channel and rushed down to the scene, hoping to get exposure for his artwork. Gilbert styled the hair of Mojo Jojo, as he plummeted to his doom and attempted to style the hair of The Powerpuff Girls too but the girls declined the offer, much to the anger of Gilbert. Gilbert got so mad that he transformed into Gigi the Great, which was a big, weird creature, who had scissors and a comb for hands. Gigi used his hypnotic powers to lure Buttercup into coming toward her, wanting to become a blonde. Just then, however, Blossom and Bubbles used Buttercup's hammer to knock Gigi out cold.

The Powerpuff Girls brought the unconscious Gigi back to the lab, where The Professor and Ken turned him back to normal. When they turned him back to normal, everyone who had previously been affected by his hairstyles and hypnotism had returned to their normal selves and realized how stupid their new hairstyles were. Everyone got mad and protested against Gigi. Soon, an angry mob started attacking Gigi.

Gigi referred to Squiggles for reassurance and by pulling the string, he turned into his evil form again. The Powerpuff Girls learned that the teddy bear was triggering the transformation and they teamed up to stop him. The Powerpuff Girls used sunglasses to protect themselves against their hypnotism, but this was not enough to stop Gigi. Gigi also had the ability to grow really huge and started chopping concrete buildings in half and completely redesigning their architecture for the worse.

Blossom distracted Gigi, while Bubbles and Buttercup got a box full of hair gel and later doused Gigi with it. The hair gel was sticky and since Gigi was hair-based, he became immobilized and vulnerable to the girls' attacks. The girls all took their shots and Gigi was defeated.

The Powerpuff Girls changed Gigi back to normal and reprogrammed Squiggles to make him into a better influence on his behavior again. Surprisingly, Gilbert was still working at the hair salon, although now, things were sort of different, as his co-workers were making him rebuild the place after he destroyed it. Gilbert tried to get Squiggles to tell him that he did not need to listen to them but now, Squiggles was telling him that he needed to quit his whining and start acting like a civilized human being. Gilbert got mad and started pitching a fit but he eventually pulled himself together and got back to work.

In the episode "The Professor Gets His Cut", Gigi invented a new hairstyle, that looked just as idiotic as the last. She made a rainbow, spiky, clown hairdo, which got rightfully insulted by his co-worker. Gigi got mad about this, which caught the attention of HIM. HIM made a plan with Gigi to mess with The Powerpuff Girls. HIM told Gigi that he would give him more customers if he helped him torment the girls. HIM convinced Gigi to give out free haircuts to Professor Utonium, Ken, and Poochie.

The Professor left behind a note, saying that he was "getting his cut" and the girls interpreted this as the idea that something bad was happening to him. HIM told the girls that he knows that happened to The Professor and he will only tell them if they complete a series of challenges for him. After sending the girls on a wild goose chase, he finally reveals that "getting his cut" just meant he was getting his haircut and that all of these challenges he made the girls do were just them doing his errands for him. As HIM eats his food, victoriously, he is thankful for Gigi's contributions in saving him. HIM hopes that Gigi is not allergic to robotic dogs, which he is.

In the episode "Flower Power", Gigi gives a haircut to a customer. At this time, Holly spreads her flowers all over New Townsville and a bunch of wildflowers grow on the head of his customer. Gigi freaks out just as much as his customer and claims that her beautiful haircut has been ruined. 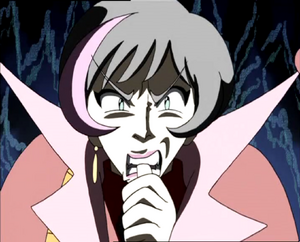 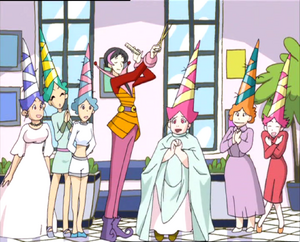 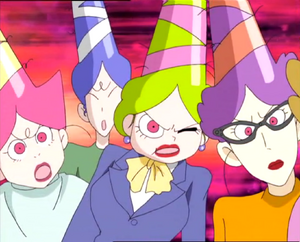 Add a photo to this gallery
Retrieved from "https://villains.fandom.com/wiki/Gigi_the_Great?oldid=3536866"
Community content is available under CC-BY-SA unless otherwise noted.