Ruler of the Principality of Zeon

Rallying support for Zeon in the One Year War.

Usurp leadership of Zeon from his father Degwin.
Conquer the Earth Sphere.

Gihren is one of the leaders of the Principality of Zeon and the oldest son of Degwin Sodo Zabi, as well as Supreme Commander of the Zeon Armed Forces and the primary instigator of Zeon's war against the Earth Federation. Under the pretense of "liberating" the colonies, Gihren seeks to bring the entire Earth Sphere under his totalitarian control. He is responsible for masterminding Operation: British, which saw Zeon exterminating the population of Side 2 and subsequently dropping the colony on Sydney, Australia (it was intended to land on the Earth Federation headquarters in Jaburo, but veered off course).

Gihren was gifted with a high IQ (240) and ingenious oratory abilities. He and his sister Kycilia were constantly at odds with each other as both had similar political goals but different methods. Although Gihren was successful in reducing his father's role to that of a figurehead ruler, he still endured Degwin's criticisms and scorn. Degwin saw Gihren as little more than an updated version of historical dictator Adolf Hitler, a role that Gihren was all too happy to take to heart. Some of his most notable supporters include Colonel Killing, Admiral Aiguille Delaz, Anavel Gato and his secretary Cecilia Irene.

With the death of Degwin's favorite son Garma Zabi in battle, Degwin withdraws from day to day duties as Zeon's leader which effectively made Gihren the leader of Zeon. Gihren later gave a speech at Garma's state funeral. This speech was notable for being the debut of the trademark salute "Sieg Zeon!" (literally translated as "Victorious Zeon").

In an effort to circumvent the Antarctic treaty (which forbade nuclear, biological, and chemical weapons as well as colony drops on Earth), Gihren launched his most ambitious project, the Solar Ray cannon. This consisted of a hollowed-out colony cylinder rebuilt into a giant carbon dioxide laser with the ability to destroy entire fleets. Gihren later learned that Degwin, tired of the war, decided to take his personal fleet to a designated area in space where he would meet the fleet of Earth Federation representative General Revil and discuss peace negotiations. Gihren arranged for a firing of the Solar Ray which destroyed Degwin and Revil's entire fleet. However, this may have cost Gihren one of his tactical advantages, as the aiming of the laser had to be toward a direction which can only destroy 1/3 of the EFSF fleet, instead of the most effective direction that can destroy 1/2. The laser had to be recharged and thus did not have the chance for a second firing before the EFSF decided to rush their attack, fearing the laser will wipe out their fleet if they delayed.

Kycilia eventually learns that the death of her father was no mere accident and personally executes Gihren for the crime of patricide. As a result, she takes over during Battle of A Baoa Qu, resulting in many Gihren loyalists withdrawing from the battlefield. However, the bulk of the withdrawal, including the Delaz fleet, left when the Dolos class ships sank, before she officially took over and announced Gihren's death. In the novelizations by Yoshiyuki Tomino, Gihren did arrange an aiming of the colony laser that killed many friendly forces but Degwin (who apparently survived the war) was not among them. Gihren, however, was still killed by Kycilia for his treachery.

Gihren's own father compared him to the real-life dictator Adolf Hitler, which may not be completely inaccurate. Like Hitler, Gihren appeared to believe in a "survival of the fittest" mentality and that the "Superior Race" should rule over the inferior ones (the superior race being Spacenoids from Side 3 and the inferior the Earthnoids). He also shared Hitler's gift for oratory and manipulation, taking the reins of power from his father behind the scenes the way Hitler did with the German president of his day. Unluckily for Gihren, he also had a number of Hitler's personality flaws, such as an over-reliance on miracle weapons to turn the tide against numerically superior foes. By this logic, the assorted super weapons such as the MA-08 Big Zam and Apsalus Project Mobile Armors can be seen as analogies of the V1 and V2 rocket bombs used by the Third Reich. Like Hitler, he also greatly overestimated the capability of his forces. This was shown during the final battle of the One Year War, when despite his claims of superiority his forces were overcome by those of the Federation. 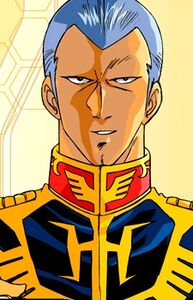 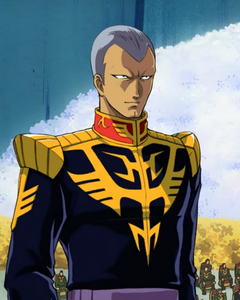 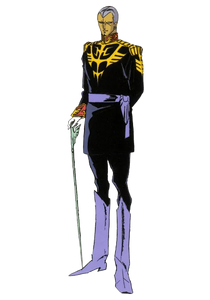 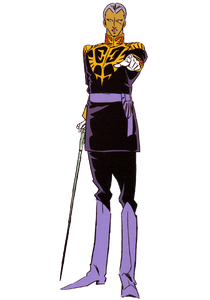 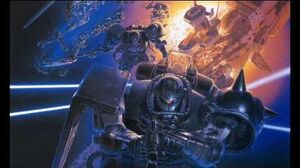 Retrieved from "https://villains.fandom.com/wiki/Gihren_Zabi?oldid=3577218"
Community content is available under CC-BY-SA unless otherwise noted.