To get his revenge on Ron (failed)

Gil Moss, better known as Gill, was a former camper at Camp Wannaweep and an antagonist in the animated TV show Kim Possible. Gill has the distinction of being one of the few members of the Kim Possible rogues' gallery to be one of Ron Stoppable's foes, the only other characters being Lord Monkey Fist and Señor Senior, Junior.

He was voiced by Justin Berfield, who also portrayed Reese Wilkerson from Malcolm in the Middle.

During childhood, Gil Moss went to Camp Wannaweep. He was an avid swimmer, and also somewhat of a bully towards Ron Stoppable, considering him a squeeb. He ended up switching arts and crafts with Ron in exchange for the swim hour, an event that would come back to haunt both of them. Because of the switch, he ended up eventually mutating into a hybrid fish-man as a result of Lake Wannaweep being polluted by Science Camp with mutagenetic biohazard. Because of this, he ended up wanting revenge on Ron.

Having somehow tracked Ron Stoppable down to Middleton High School, a now-teenaged Gil, who has changed his name to Gill to fit his current mutated appearance, has managed to send a fake message about a cheerleading competition somewhere in close proximity to the closed-down camp. In addition, to further ensure that his revenge plans work, he sabotaged all communications from the camp so the squad cannot call 9-1-1. Gill then abducts Barkin and two other members of the cheerleading squad with the intention of mutating them as part of his revenge scheme against Ron, eventually managing to get the entire squad. After explaining what has happened to him and what his intentions are, he then hunts down Ron with an almost predatory method. Eventually, Gill manages to track Ron to Lake Wannaweep, but Ron ends up tricking Gill into being snared in his trap in a boat that is rigged to crash into the docks. Gill is then placed in a biochem unit to restore him to his human self, although not before vowing revenge against Ron.

Gill is then restored to Gil, and starts to live a normal life as a mascot of another high school's football team. But he begins to miss his old abilities, so he arranges for a cheerleading competition (this time, legitimate) to be redirected to a newly reinstated and redone Camp Wannaweep (whose name is changed) by sabotaging pipes at the original location. He plans this so he can access a grotto hidden in the newly cleaned lake that had a high concentration of the biohazardous waste to restore him to his mutated form. He manages to do so, and starts attacking the camp with enhanced abilities, including a camouflage technique similar to a chameleon or an octopus. He is ultimately defeated at Clown Camp and his rampage is stopped. Gill is later reinstated at a biochem unit for more recovery, this time with more strict monitoring.

As noted above, he is an avid swimmer. He also seemed to have an innate knowledge of how devices work and is skilled at sabotage work, as he managed to sabotage a communications camp as well as various pipes. In addition, as evidenced by both his appearances, he was also a methodological planner, having planned various factors and manipulated events so he can come close to succeeding.

Post-mutation, he also gained the ability to infect others into becoming mutants by hitting them with gunk either through direct bodily contact or by spitting the gunk out. When he was restored to his human form, he also seems to mutate when near high-concentrations of the same substance that mutated him, as implied when Ron discovered monstrous footprints when tailing Gil when he was searching for the magic mucka. After his second mutation, he gained even more abilities, such as a larger spitting volume and chameleon/octopus-like camouflage abilities as well as the ability to have an extendable object on his body.

Gil as a regular

Gill after his first mutation 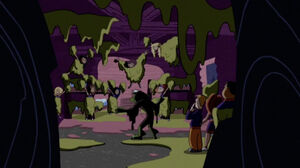 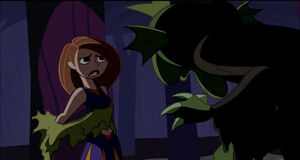 Gill with a captive Kim Possible 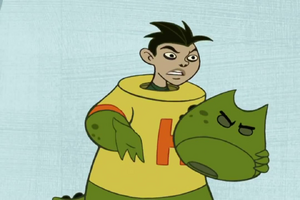 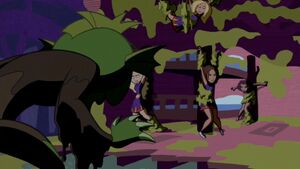 Gill with his cheerleaders captives. 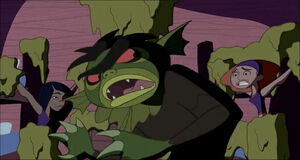 Gill with the captured Liz and Marcella as his prisoners.
Add a photo to this gallery

Retrieved from "https://villains.fandom.com/wiki/Gil_Moss?oldid=3895371"
Community content is available under CC-BY-SA unless otherwise noted.