Chairman of the PLANT Supreme Council

Playing with his chess board.

Free the world from war by removing free will.

Gilbert Durandal is the chairman of the PLANT Supreme Council and the main antagonist in the anime Mobile Suit Gundam SEED Destiny. Durandal seems to have the agenda of ending all conflicts between humans, especially the chasm between the Naturals and the Coordinators, i.e. the Earth and PLANT.

Above all, Durandal seeks peace and doesn't follow the genocidal intentions of Patrick Zala and his followers. His words are meant to inspire people to follow his ideals of a perfect world without war. Durandal is seen as a cunning strategist who always thinks ahead of his adversaries. However, Durandal is also willing to eliminate those who are not committed to his cause or have not been swayed to his side, such as Athrun Zala. Durandal's personal goal for a world without war comes in the form of his mysterious Destiny Plan.

He is voiced by Shūichi Ikeda, who is famous for the voice of Char Aznable of the original Mobile Suit Gundam.

Although there isn't much information abound Durandal’s past it is revealed that he once was working as a geneticist. He also was a friend of Rau Le Creuset and it appears that it was him who gave Creuset the pills to stop the pain from his genetic malfunctions. In the past he also had a relationship with later Minerva captain Talia Gladys but it seems that she left him because she wanted a child. Nevertheless it appears that in CE 73 they are still sleeping together (which is once shown when they were sharing quarters on the Minerva). In the new Gundam SEED Destiny Astray manga, he is shown with Kira's father Ulen Hibiki. This suggest that he not only knew of Hibiki's Ultimate Coordinator project, but may have also participated in it. This connection between Durandal and Hibiki was never clarified in the actual show, but may be expaned upon in future volumes. Years prior to the events of the Bloody Valentine War, as depicted in Gundam SEED X Astray, a mysterious black-haired man wearing sunglasses met the then-escaped young Canard Pars and instigated him against Kira Yamato. In CE 73 this man is revealed to be Durandal; However, his reasons for doing so are still unknown.. Also, at least one staff interview has suggested that during the time of the first SEED series Gilbert was involved in PLANT-funded experiments to deal with the reproduction problems appearing in later generation Coordinators.

A research notebook recovered by DaCosta on the abandoned Mendel space colony revealed that Durandal has something in his mind called the Destiny Plan, and it is related to his passionate speech to the entire world about defeating the warmongering LOGOS and creating a new world where war no longer exists. The Archangel's crew think his plan would be to implement a new world order where every human is given the role for which they are best genetically suited at birth, and this would fulfill Durandal's ideal of perfect genetic determinism, as this should be the ultimate goal of all Coordinators. Under this theory, humans will no longer fight against others for things that they wish, since each person's destiny are predetermined at birth. In this New World, genes would be the King, and Durandal would be the High Priest (in terms of chess). After Lord Djibril's death, Durandal revealed the Destiny Plan to the world. However, the only opposition towards it was Orb, the Kingdom of Scandinavia and the Atlantic Federation. Durandal authorized the use of a rebuilt Requiem to eliminate President Copland at the Arzachel base. But as he turned his eyes on Orb, the Terminal forces, along with dissident ZAFT ships and remnants Alliance forces gathered to destroy the Requiem. Durandal branded them, "enemies" of mankind, generally as remnants of Logos. Kira and the others destroy the Requiem and he was angry that he failed.

Gilbert dies at the last day of Second Bloody Valentine War, shot by Rey Za Burrel, formerly his most faithful follower. His lover, Minerva's captain Talia Gladys, stayed behind in the crumbling fortress to accompany him right till the end. The three of them are later crushed to death by falling debris. 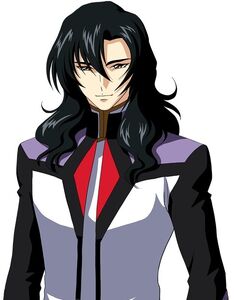 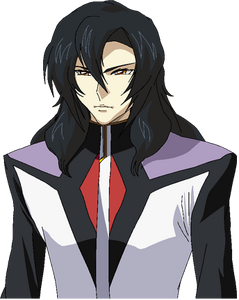 Durandal in Battle Destiny
Add a photo to this gallery

Retrieved from "https://villains.fandom.com/wiki/Gilbert_Durandal?oldid=4101929"
Community content is available under CC-BY-SA unless otherwise noted.