Gain as much money by exploiting his customers (failed).

He is the founder and CEO of Insuricare as well as Mr. Incredible's former boss, who ends up losing his job when Huph prevents him from stopping a mugging and causes him to snap, revealing his true nature as a super by hurling Huph through several walls, severely injuring him and forcing Rick Dicker of the NSA (National Supers Agency) to intervene.

He was voiced by Wallace Shawn, who also played Vizzini in The Princess Bride, Dr. Elliot Coleye in My Favorite Martian, Taotie in Kung Fu Panda: Legends of Awesomeness and Bertram in Family Guy.

Mr. Huph is first seen furiously walking into Bob's office angrily yelling at him for authorizing payments on policies for clients and subsequently scolding him for listening to and falling for any sob story.

Mr. Huph later realizes that Bob is giving clients loopholes, so he angrily calls him down to his office to talk to him. However, he admits his true nature to Bob, who is dumbfounded by his selfishness. Throughout the talk, Bob notices a man being beat and robbed. When Bob tries to intervene, Mr. Huph furiously yells at him and angrily threatens to fire him if he leaves his office. This causes Bob to furiously snap for failing to save a citizen, angrily grabs Mr. Hugh by the throat and violently throws him hard enough to send him through several walls, severely injuring, but not killing him.

In the hospital, after talking to Rick Dicker, who was mad at him for abusing his authority and not properly doing his job to help others, he is convinced not to sue Bob, but does indeed fire him. It's possible Mr. Huph had his memory wiped of any recent memory so he would forget Bob Parr and not potentially piece together that he's Mr. Incredible, or was arrested for exploiting his customers after he recovered.

While Mr. Huph isn't seen or mentioned, his company Insuricare is referenced by Bob and Helen in a discussion about finding a new job or working with Winston Deavor. Bob mentions how much he hated his former work, alluding to Huph's abuse towards him.

Mr. Huph is best described as being selfish, greedy, but most of all, very short tempered with little to no concern for his customers. Instead of helping his customers, he tries getting the most money possible by denying his clients aid even if they have suitable claims. He even goes as far as getting angry at his employees (especially Bob) if they try giving aid to the clients. He is easily riled up enough to yell As a result, Bob is well depressed at work.

Mr. Huph later reveals his true nature, and tells Bob that he really has no interest in helping his customers, but the people who can support him so he can get more money, even hoping a man that was mugged right in his view doesn't come to him for his help. This caused Rick Dicker to end his friendship with Mr. Huph for angrily firing Bob and not helping others.

Despite his short size, Mr. Huph is not afraid to to talk down to anyone, even people like Bob, who are much larger than him. Obviously though, this overconfidence that he could bully, intimidate or belittle anyone who worked for him without consequence would prove to be his undoing when he enrages Bob enough with his greediness and lack of empathy to provoke him into hurling him through several walls in a fit of anger, landing himself in the hospital as a result.

However, despite this, Huph is able to listen to the voice of reason, as is evident in his talk with Dicker when he was persuaded not to sue Bob for assaulting him. 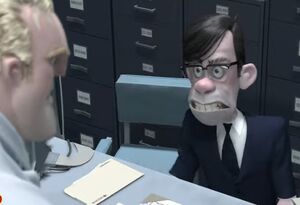 Huph angrily berating Bob for authorizing the payment of the Walker policy.

Huph angrily yelling at Bob for hearing any "sob story" and falling for it. 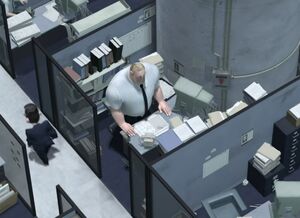 Huph walking away from Bob's office. 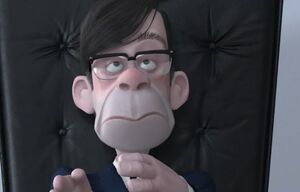 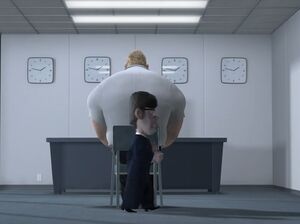 Huph angrily arguing with Bob about the loopholes his clients received. 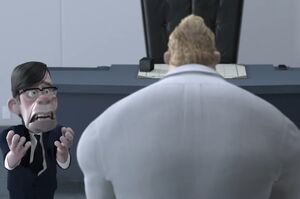 Huph exasperated by how helpful Bob is with his clients. 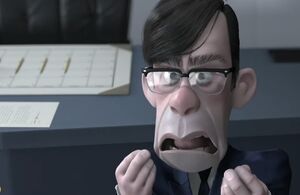 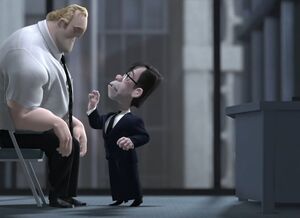 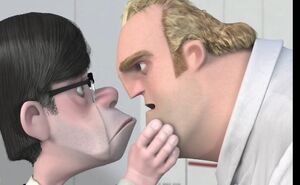 Huph trying to stop Bob from saving a citizen who is being mugged. 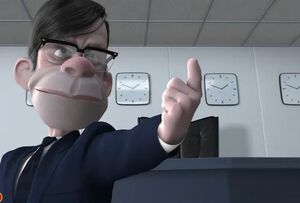 Huph evily smiling after forcing Bob to leave an innocent to get mugged and considering it as abetting and aiding. 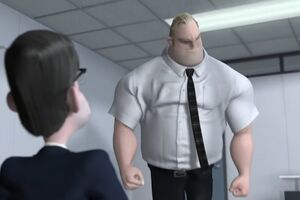 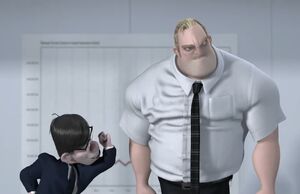 "You were this close to losing your--" 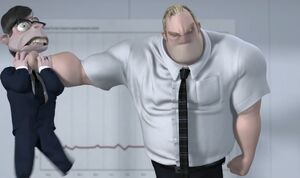 Bob, disgusted by Huph's insensibility, furiously grabbing him by the throat. 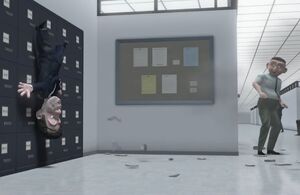 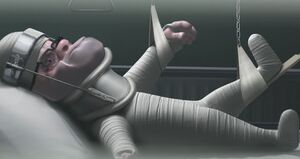