Kill Keith Flick or bring him to his level of brutality like him.

Prevent discovery of his crimes at all costs, even if he has to kill.
Continue killing women for pleasure.

He is the head forensics coroner that works with the Royal Investigative Service, but it is revealed as the responsible for the actions of Market Maker and the crimes that they commit. He is also responsible for the attack on Koku's school and subsequent massacre. He is the former best friend-turned-arch-nemesis of Keith Kazama Flick, as well as the murderer of his sister, Erika.

Gilbert Ross was a dissociative, psychopathic maniac who had constant desires to commit murder. While he was able to suppress this urge in his youth, it eventually broke out when he was young. Ross's father, Albert Puzo, was the director of the White Cage Institute, where scientists worked in an attempt to turn children into gods with special abilities. However, this attempt failed and the insane results of the experiments, known as the Reggies, banded together to form the Market Maker organization and have since served the royal family as human weapons and assassins.

Gilbert attended college with Keith Flick and they became good friends. However, Ross always felt subliminally inferior, just before finals, Keith and Ross talked and Ross, fascinated by his friend's brilliant mind, asked if there was anything he didn't understand. Keith replied that he could not understand the murder, stating that he despised the murder and compared it to losing his mind. The words hit Gilbert hard, and after the meeting he cried for the first time in his life; He looked at him as if Keith was going to reject him outright. After that, Ross became obsessed with finding out what circumstances would cause Keith to kill himself and decided to put Keith in a situation where he had to kill.

Soon after, Gilbert gained control of the Market Maker, by which time he had already killed his father, his first victim. While Ross officially served as head of the Royal Investigative Service (RIS) government police autopsy, he secretly ran the Market Makers. He also used Marker Maker's money and influence to build an underground complex under the RIS headquarters, where he would later commit his murders. When he found out about the Reggie named Minatsuki, who had the ability to manipulate people with his eye and brainwash them, Ross attacked the White Cage Institute with the Market Makers and killed most of the Reggies and the scientists there, but they left Minatsuki and some Reggies alive. So, Gilbert manipulated the reclusive Minatsuki, pulling him to his side and tricking him into killing Heath Kazama, Keith's father. Through his manipulation and brainwashing, Ross also tricked Minatsuki into believing that Ross himself was immune to his abilities.

In the years that follow, Gilbert has committed more than 50 murders, acting out the same pattern every day and unable to resist his murderous urges. He kidnaps people, drugs them and has an ambulance brought to the RIS, where they are taken to his morgue as corpses. No one realizes that the "corpses" are actually still alive, and thus Ross is able to calmly and unnoticed dismember his victims after the crime at work. Gilbert killed 37 women who looked like Erika in the following years alone; in total there were more than 46 victims.

He stores their bodies in glass cases in his underground complex. Ross kills with extreme ease and then rashly goes about his daily business. After that, use Minatsuki to make someone else do it. After the person is arrested and then dies, either by murder or forced suicide, Gilbert goes about his business as usual until the urge to kill takes over again. If you ever feel a pang of remorse or self-doubt, create a new emotionless self and erase the old weak self. Thus you can save your sanity from the damage that a thoughtful review of your actions would do; The need to kill is also transmitted.

However, Ross is unaware that Keith is suspicious and has been investigating him ever since Erika's murder, but, due to Ross's sheer intelligence, Keith was never able to find any evidence. When "Killer B" shows up in town, Keith has the files transferred to RIS headquarters, where Ross also works. This allows Keith to continue investigating his friend while pursuing Killer B.

After his return to RIS, Keith visits Gilbert at his institute, when he sees Keith, he greets him warmly and the two walk out, Keith bluntly pointing out that he doesn't see any ashtrays anywhere, and Ross replies that's why he quit smoking long ago. a time. Gilbert cautiously asks Keith if today isn't the anniversary of Erika's death, which Keith sadly confirms, the two talk briefly, but soon Keith gets a call and has to leave. He throws Ross a pack of cigarettes before he leaves and shocked, Ross sniffs himself and asks how Keith knew he was lying about smoking, telling Keith he can come back if he wants to drink coffee again.

After a poisoned corpse is found in the city, Ross dissects it. He later informs Keith that the man was killed by a poisonous gas created specifically for the victims to suffer, although in reality it is the work of the new generation of Market Maker, made up of Minatsuki, Laica and the other reggies from White cage. When Keith asks if there is an antidote, Ross says no, as they have never come in contact with poison. He states that he has already contacted the military medical department for help, but cannot say how long it will take. Gilbert advises Keith to catch the villain before he can commit any more murders. As Keith turns to leave, Ross asks him if he's still looking for Erika's killer after seven years and if he's found anything yet. Keith replies that he doesn't know yet, but he found a clue that will lead him to the killer.

A moment later, Keith revisits Ross, stating in the fact that an attack was perpetrated on RIS agent Brandon, he is amused that Keith is barely back on duty and all hell breaks loose. But in reality, it was Ross who ordered the attack on Brandon because he realized that the Market Maker were monitoring the RIS with a surveillance program. Gilbert asks if Brandon will survive the attack, and Keith grimly replies that this time it's much worse than before. Ross jokingly states that while in college, he often thought about developing a drug against Keith's black paint. Keith finally asks if Ross has ever read the Moby Dick book and Ross reminds him that Keith lent it to him once. Keith mutters that he wishes he had known.

After RIS agent Jean Henri Richard, whom Minatsuki manipulated into killing Brandon in the hospital, commits suicide to blame Keith for his death, Keith's young colleague Lily visits Gilbert Ross and he notices her. He notices that she came to him about Keith and asks Lily if Keith is a suspect. Lily confirms this and Ross reveals that he has known Keith since their time together in boarding school and that they can't seem to get rid of each other. When Lilly asks if he thinks Keith would be capable of murder, Ross asks her back. Lilly reveals that she doesn't believe him and asks Ross to tell her everything he knows about Keith and states that Keith cannot act spontaneously and therefore cannot be the killer. When Ross realizes that Lilly is worried about Keith, he sighs and reveals that it's the old song; many people are attracted to Keith, even though he is a strange person. Embarrassed, Lilly hastily says goodbye and leaves the office. 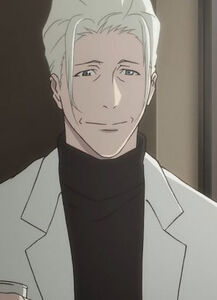 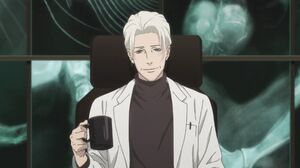 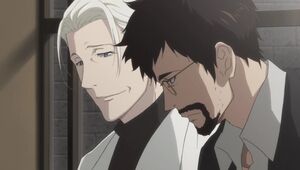 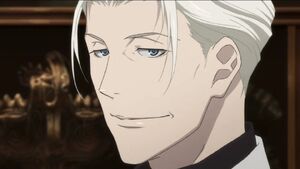 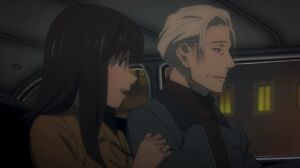 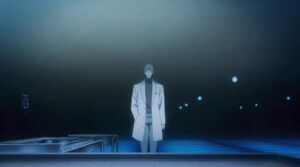 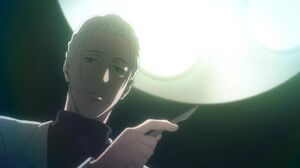 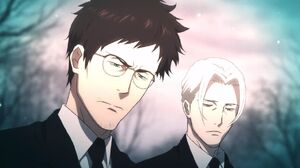 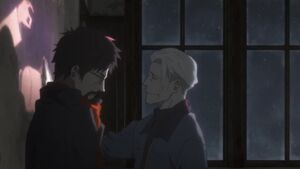 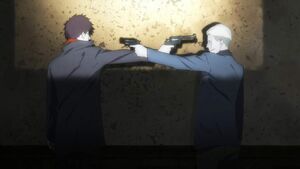 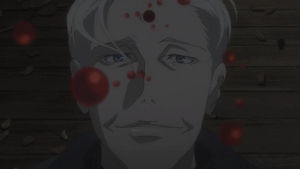