Head of Market Research for the Royce Company

Take over the Royce Company.
Get rid of his rival Gordy (all failed).

Gilbert Sipes is the main antagonist of the 1994 film Gordy.

He was a selfish and conniving businessman who wanted to marry Jessica, take over the Royce Company and get rid of his rival Gordy.

He was portrayed by James Donadio.

Nothing much is known about Sipes except that he was hired by the founder and head of the Royce company Henry Royce and became the head of market research. It is also unknown how he and Henry's daughter, Jessica met which was either before or after he started working for the company.

Sipes is first seen at a dinner party where famous country musician Luke MacAllister is performing for the governor of Arkansas.

After a pig named Gordy saves his future stepson Hanky from drowning, Gordy becomes a national hero and Hanky's pet.

His boss Henry Royce decides to uses the pig's face to represent their products. Sipes disagrees and says that he has already auditioned his daughter Jessica for this job and thinks that she would be more suitable, so his boss decides to test each candidate in a series of television commercials and see which one the public chooses. Sipes agrees.

Jessica is nervous saying that she can't compete with a pig, but Sipes assures her that everything will be alright as he's hiring Mr Kokoyachi, the most famous fashion photographer in the world.

The day arrives and Sipes talks to the director and asks him to film Gordy with a wide-angle camera lens, unaware that Gordy is watching, has heard every word, and knows he is up to no good, so he and Hanky switch it back to normal.

After Gordy's commercials have finished filming, they film Jessica's commercials with Sipes grinning throughout, unaware that they are using the wide-angle lens that was meant for Gordy. After the filming is finished, Sipes sends the films for immediate delivery, confident that he has destroyed Gordy's career for good.

A month later, he and Jessica along with Gordy, Hanky and every member of the Royce Company meet at the company to see the results. The District Attorney Brinks declares that Gordy outsold the competition 100 to 1.

Jessica is astonished and Sipes refuses to believe it and orders someone to roll Jessica's commercial test. It shows Jessica's face being puffed up like a balloon on screen because of the wide-angle lens that was used during filming. Everyone laughs except Jessica who feels humiliated and an awestruck Sipes not understanding what happened.

Despite Sipes' demand for a retest, his boss decides to sign up Gordy to a life time contract and after still saying that Gordy is still the wrong candidate, loses his responsibility for the company with Mr. Royce deciding to deal with Gordy personally.

Gordy becomes more and more popular and Sipes becomes more and more angry. Finally when the pig gets his own music CD, it's the final straw and tells his assembled henchman Dietz and Krugman along with Brinks that no one is standing in his way of him taking over the whole company and being married into the family with Jessica. He orders his two henchmen to kidnap Gordy, put him in a sack and toss him in the river.

Dietz and Krugman try after Hanky and Gordy decide to go on a trip to find the pig's family, but fail. Later on Mr. Royce dies of a Heart Attack and leaves a will stating Hanky as the heir to the Royce company, but being of such young age, places Gordy with the responsibly which angers Sipes even more, especially when he sees the MacAllisters return with Hanky and the supposed dead Gordy.

Hanky and Gordy begin making new ideas for the company including doing healthy products instead of the originals brands they've always done. Sipes finds out that Hanky and Gordy have inherited a sausage factory and decides not to tell them.

Cousin Jake (Luke's Cousin) decides to organize a giant country-wide search to locate Gordy's parents and also a country music concert in Branson, Missouri in Gordy's name. A host of country singers including Luke perform, as well as a surprise speech from President Bill Clinton who unveils a new stamp of Gordy. Sipes sends his henchmen to kill Gordy once again while he is in the audience with Jessica, but he is saved by Cousin Jake. Jake returns Gordy to Hanky and Jinnie Sue. Everyone learns from someone who calls into the telethon that Gordy's parents are going to be slaughtered at the sausage factory in Nebraska that the Royce Company owned. They find out that Sipes was hiding this from them and a fierce fist fight takes place between him and Luke ending with Jessica hitting him with Brinks' briefcase and Luke giving him a brutal punch which sends him spiralling into some curtains that he rips off and falls to the floor.

It is unknown what happens after this, but Luke marries Jessica and they use the Royce fortune to buy the farm where Gordy lived, which states that Sipes was possibly fired from the Royce company as he is never seen or mentioned again.

At the beginning of the film, Sipes seems like an ordinary good natured man, it is only later in the film when Gordy becomes famous that he reveals himself to be scheming and conniving. He also shows signs of jealousy whenever Luke MacAllister was around his fiancee.

Sipes with his fiancee Jessica Royce 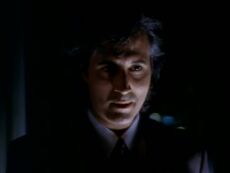 Retrieved from "https://villains.fandom.com/wiki/Gilbert_Sipes?oldid=4060503"
Community content is available under CC-BY-SA unless otherwise noted.