Creature From the Black Lagoon

The Creature from the Black Lagoon

Kidnap as many ladies that he can.

The Gill-man (better known as the Creature from the Black Lagoon, the Swamp Creature, the Amphibian Man and the Asset) is the titular character and an antagonist in the classic sci-fi film The Creature from the Black Lagoon and its two sequels. It has since become an iconic Universal monster, although never reaching the status of Frankenstein's creation, Count Dracula and others.

The Creature from the Black Lagoon

Gill-man is a living fossil, the only survivor of a species from the Devonian age, a period dominated by giant amphibians. It is a semiaquatic humanoid beast, able to breathe and survive equally well in air or water. It has a tough skin, full of flaps, and its hands and feet are webbed, but also possess claws. It has both gills and lungs and is much stronger than a human being. It is also more resistant to injuries, such as gunshots, and its biology allows it to heal injuries more quickly than other species.

35% of the creature's blood consists of white corpuscles with no nucleus. Its natural environment is a dark, murky lagoon situated deep in the Amazon Rainforest, and as a result the beast stays away from bright lights. It is also very vulnerable to rotenone. It can also build dams on the rivers to prevent boats from leaving or coming in.

In the first film, a team of researches travel to the Amazon base to search for fossils of the creature. Instead, they end up finding a live specimen, which kills several team members and kidnaps one of them. The kidnapped woman is later rescued and the creature is shot down and sinks slowly into the depths of the lagoon. The second film (Revenge of the Creature) reveals that it is still alive.

In this film, Gill-man is captured and sent to an aquarium in Florida to be studied. It escapes to the ocean and once again kidnaps a woman, and once again it ends up being shot down and disappearing in the waters. The third movie (The Creature Walks Among Us) shows the creature suffering a horrible accident and undergoing surgery which makes it more human-looking.

After unsuccessful attempts to integrate the monster in society, it finally escapes back to the ocean.

The Gill-Man made another notable appearance on the 1960's sitcom The Munsters wherein he was the family's Uncle Gilbert, made very wealthy by all the ships that have sunk near his lagoon. In this, he is fully sentient, speaks coherently, and is quite friendly and gregarious. He also wears a trench coat, and when he sits down, water leaks over the floor.

Gill-man was also a minor antagonist in the 1987 Comedy/Horror film "Monster Squad". The Gill-man was one of the least featured monsters in the film, though his design has become somewhat famous.

In the movie, he was shown bringing a box containing Frankenstein's Monster (who was previously shown being dropped from an airplane into the Black Lagoon) to Dracula. Later in the film, he is shown stealing a twinkie from a child (despite his friends's disbelief). At the end of the film, he comes out of the sewers and kills multiple police officers, before getting shot by Horace. 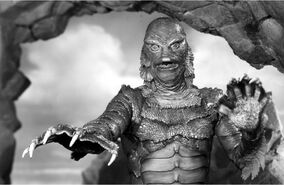 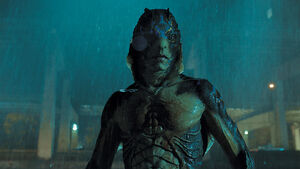 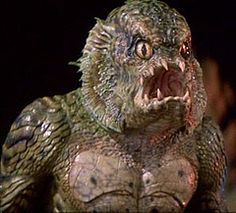 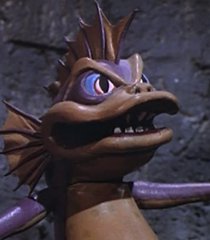 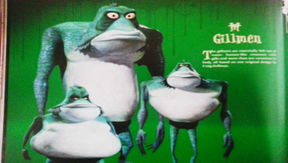 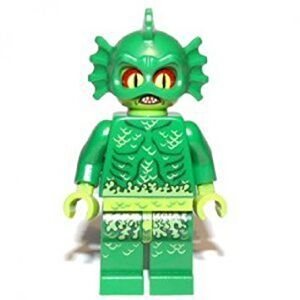 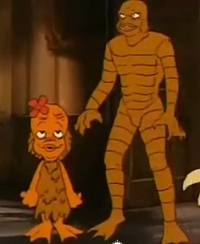 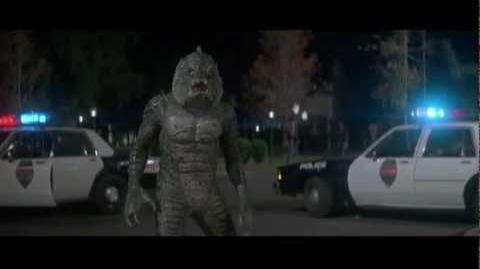 The Monster Squad - Gillman's Death
Add a photo to this gallery
Retrieved from "https://villains.fandom.com/wiki/Gill-man?oldid=3174038"
Community content is available under CC-BY-SA unless otherwise noted.